Some in the debt collection industry view the impending rulemaking from the CFPB as an exercise in creating more obstacles for their business. But ARM industry leaders recognize the opportunity presented in responses to the Bureau’s advance notice of proposed rulemaking (ANPR). For once, collectors have an actual say in the direction of regulation.

These leaders sat down with consumer advocates Friday at insideARM’s Large Market Participant Summit in Washington, DC for a panel – moderated by ARM defense attorney David Kaminski — to discuss what consumers want to see from the CFPB’s debt collection rulemaking. While some of the panel’s suggestions were at-odds with ARM industry interests, there are some rule reforms that could benefit both consumers and collectors.

The main focus of the advocates on the consumer was the flow of verification information from creditors to third party collectors and debt buyers. Margot Saunders, of the National Consumer Law Center, noted that in this current age of cheap data storage, “there is no reason all of that data cannot be made available to those downstream.” She suggested that the standards put forth in the OCC’s consent order with Chase be made mandatory across the entire industry.

Linda Sherry, Director of National Priorities at Consumer Action, commented that “collection agencies shouldn’t have to go back to the creditor to get documentation.”

The idea of a centralized repository for documentation on consumer debt accounts, populated by original creditors and accessible by the ARM industry and consumers, was also discussed by the panel.

That repository, while a good idea for many involved, could have unintended consequences, according to the ARM industry’s representative on the panel, Barbara Hoerner – counsel and Chief Compliance Officer at collection agency Progressive Financial Services. She noted that ARM firms already have a ton of different data standards requirements in their systems and that adding another would be onerous. 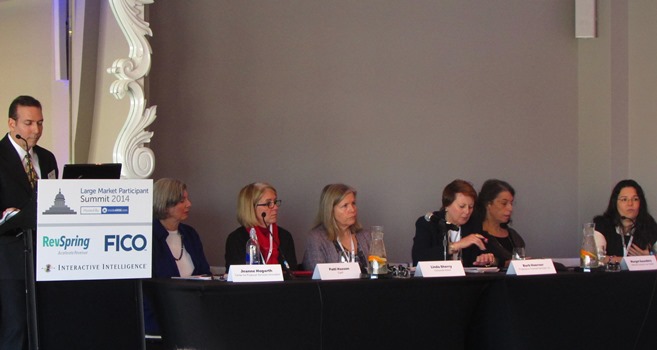 In a follow-up blog post, panelist Dalie Jimenez – Associate Professor of Law at the University of Connecticut – also pointed out that that a centralized storage platform might give rise to security concerns, especially in the light of recent high-profile consumer credit data breaches. But she also noted that placing the initial onus on the creditor seems like a good idea and that the CFPB is heading that direction anyway with many of its debt collection regulations.

The main area where consumers and debt collectors might find common ground in new rules is communications. Saunders said that as long as consumers give consent, she can find no reason why collectors can’t use email to communicate, especially with regard to validation. She noted that there is already a federal standard to allow for this: the E-Sign Act.

When the conversation turned to voicemails, things got more technical. None of the panelists wanted to take an official position on rule changes that would allow the use of voicemails, with Saunders noting, “The law is clear: no voicemails at all on systems that can be accessed by others.”

But Jimenez did concede that consumers do want more comprehensive communication options. She said that the younger generation has already blown past voicemails and now desire a mechanism to communicate electronically with debt collectors.

Sherry also suggested that a registry of collection agencies would be helpful for consumers looking to resolve problems. Consumers could theoretically access the registry to get a point of contact — like a compliance manager or executive — within a particular company should issues arise.