Editor’s Note: Multidistrict Litigation (MDL) is a special federal legal procedure designed for handling complex cases. MDL cases occur when civil actions involving one or more common questions of fact are pending in different districts. In order to efficiently process multiple cases that could involve hundreds (or thousands) of plaintiffs in multiple different federal courts that all share common issues, those cases are consolidated and transferred to a single court for all pre-trial proceedings and discovery.

In this instance the MDL originally involves four (4) separate actions. The various actions that were consolidated in the MDL all involved allegations that PRAA violated the TCPA by placing debt collection calls to consumers’ cellular phones using an Automated Telephone Dialing System (ATDS).

The Plaintiffs in the case (In re Portfolio Recovery Associates, LLC, Telephone Consumer Protection Act Litigation, Case No. 3:11-md-02295, United States District Court, Southern District of California) filed an Unopposed Motion for Preliminary Approval of Class Action Settlement and Class Certification that lays out the terms of the proposed settlement. A hearing to approve the proposed settlement is set for June 6, 2016.  A copy of that motion can be found here. The Defendants in the case are the aforementioned PRAA and PRA Group, Inc.

The proposed settlement consists of the following:

to Plaintiffs’ counsel. (The data file identifies approximately 7.4 million Class Members as meeting the definition above.)

The TCPA is 1991 legislation. It was enacted before the widespread use of cell phone. It was designed to prohibit telemarketers that randomly dialed phone numbers of people where there was no prior business relationship. In a February 5, 2016 Blog posted in the U.S. Chamber Institute for Legal Reform website, a quote from Becca Wahlquist, an attorney for Snell & Wilmer, described the TCPA as “A destructive force that threatens companies with annihilation for technical violations that cause no actual injury or harm to any consumer.”

The blog also noted that “TCPA case filings increased over 940% during the five-year-period between 2010 and 2015.” The following chart accompanied the article: 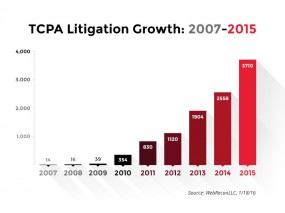 insideARM has written extensively on recent TCPA litigation as well as the July, 2015 FCC order regarding the TCPA. Last week at our Fourth Annual Larger Market Participant Summit a panel of attorneys from the Drinker, Biddle & Reath LLP law firm provided participants with an excellent overview of the Appeal of that order. Neither the panel members or anyone who attended that session was willing to handicap the potential outcome of that appeal.  The ARM industry should be responding to all published TCPA opinions and modify practices accordingly.