FDCPA Lawsuits Could Decline in 2012 After Years of Growth

If the pattern through the first six months of 2012 holds, this year would mark the first decline in lawsuits filed by consumers against debt collection agencies claiming violations of the Fair Debt Collection Practices Act (FDCPA).

But there is still a long way to go in 2012. Various forces could cause case filings to increase in the second half of the year. A single consumer attorney, for example, could shift focus to FDCPA cases and move the needle.

The good news for the ARM industry, however, is that there were more FDCPA cases filed in the first half of 2011 than in the second half of the year. 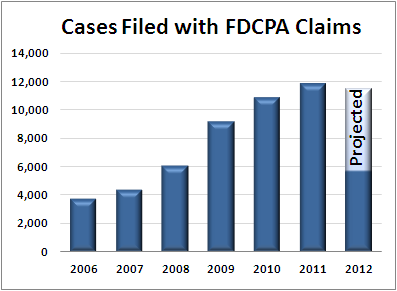 Since WebRecon started tracking cases claiming FDCPA violations in district courts, year over year growth in lawsuits has been strong. From 2006 to 2009, FDCPA cases jumped nearly 150 percent as consumers became more educated about the debt collection industry and plaintiff attorneys became more aggressive in their marketing efforts. From 2008 to 2009, the year-over-year growth rate peaked at 51 percent. But after 2009, the rate of growth slowed, with FDCPA cases up only 8.8 percent in 2011 compared to 2010.

Regardless of whether the 2012 number comes in above or below the 2011 measure, the trend of slowing growth is almost guaranteed to hold. It would take an extraordinary number of filings in the second half of 2012 to achieve full-year growth of more than 8.8 percent.

Below, see the latest statistics on cases for the last two weeks of June 2012.