The Consumer Financial Protection Bureau’s expanding supervision program is not only essential to American consumers, it also seeks to engender an equitable field of play for all participants—large and small, bank and non-bank—in the U.S. credit markets. 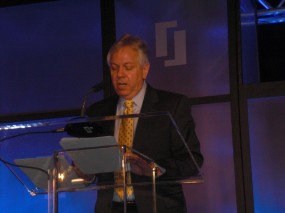 So says John Tonetti, debt collection program manager in the Research, Markets, and Regulation Division of the Consumer Financial Protection Bureau. Tonetti, who spent most of his career working for creditors and A/R companies, joined the CFPB in December. Tonetti spoke before a large group of collection and creditor professionals at Ontario Systems “Play to Win” leadership conference held last week in Indianapolis.

From 1999 to 2007, household debt almost tripled. 4.6 T to 12.5 trillion as consumers assumed credit for mortgages, credit cards, student loans and unexpected encumbrances such as healthcare costs. “You know how that’s ended up,” he says. “People got caught up in a system they didn’t understand, taking on risks they didn’t understand.”

In a properly functioning credit market, “none of this should happen because there should be an underlying basis of transparency,” Tonetti says. “In a transparent market, the buyer and the seller understand the terms of the deal so that each party can determine whether it is in that party’s best interest to proceed. That didn’t happen.”

The credit crisis spawned the creation of the Consumer Financial Protection Bureau, which opened its doors in July 2011 and consolidated the oversight authority that had been spread over seven different federal agencies. The CFPB is “a twenty-first century, data-drive agency,” Tonetti says, and that makes it unique. In Tonetti’s group it has conducted in-depth studies on reverse mortgages, private student loans, bank overdraft fees, and products that may unfairly target seniors.

“Most of you are probably most interested in our supervision function,” says Tonetti. The CFPB assumed authority to supervise banks and credit unions in July 2011 and in January of this year extended that to larger non-banks – mortgage originators and mortgage servicers, pay-day lenders, and private education lenders. The agency also has the authority to supervise non-bank “larger participants,” a designation that has yet to be officially defined, but a rule is currently under review that will include credit and consumer reporting companies. That rule will be finalized in the fall, Tonetti says, and once finalized, the CFPB will begin supervision.

The supervision approach by the CFPB will be consistent, regardless of whether the company that is being examined is a bank or non-bank, Tonetti says. By employing a consistent approach to supervision, “we’ll create a more level playing field for all market participants.”

The examination will follow the same process. The CFPB will contact management and begin an initial assessment to define the scope of the examination. The CFPB will the conduct the examination, which will include reviewing consumer documentation and even listening to collection calls. It will then issue a report with corrective action required to bring the company into compliance. It will also begin enforcement action, if necessary.

Because the CFPB is approaching the process holistically, there will be an assignment of an enforcement attorney for every examination. “The participation by attorneys represents our coordinated approach to supervision and should not be viewed as a signal of an impending enforcement action or fair-lending concerns in a review or an examination,” Tonetti says.

While banks and credit unions will be examined on a regular basis, non-bank companies will be examined based on a wide criteria, such as the volume of business, the types of products and services, the amount of state oversight, and in the future, possibly consumer complaints.

“The bureau recognizes that consumer debt collection is critical to the functioning of the consumer collection market,” Tonetti concludes. “By carefully analyzing the market and the risk to consumers the bureau will be able to develop appropriate policies and regulatory measure so this market will work better for consumers and the industry.”

Evan J. Albright is a contributing editor for insideARM and insidePatientFinance.com.