Just under 11,500 FDCPA lawsuits against debt collection and related companies were filed in 2012, according to data from WebRecon LLC. In 2011, there were 12,300 such lawsuits filed.

FDCPA cases filed in 2012 had been tracking lower than 2011 for most of the year. But around mid-year, it became apparent that 2012 could see a year-over-year decline. It was a significant development because it reversed a years-long trend in FDCPA case growth.

Since WebRecon started tracking cases claiming FDCPA violations in district courts, year over year growth in lawsuits has been strong. From 2006 to 2009, FDCPA cases jumped nearly 150 percent as consumers became more educated about the debt collection industry and plaintiff attorneys became more aggressive in their marketing efforts. From 2008 to 2009, the year-over-year growth rate peaked at 54 percent. But after 2009, the rate of growth slowed, with FDCPA cases up only 8.6 percent in 2011 compared to 2010. 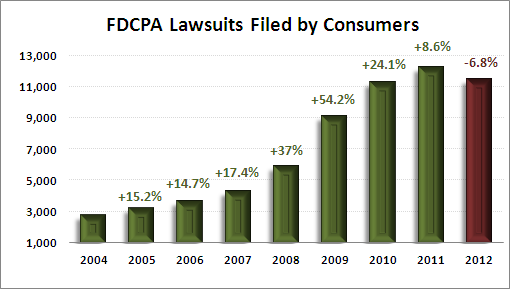 The volume of FDCPA dwarfs those of FCRA and TCPA cases combined, but the rise in TCPA suits has caused concern among debt collectors.