Collectors Are Largely Chasing the Wrong Person, According to Complaints Data

A majority of consumers using the Consumer Financial Protection Bureau’s (CFPB) complaint intake tool claim in one way or another that debt collectors are chasing an account the consumer does not think they should pay. And the numbers are growing.

When a consumer begins a debt collection complaint on the CFPB site, they are given six broad debt collection issues used to classify the nature of their complaint. The most common issue, accounting for 41 percent of all complaints, was “Continued attempts to collect debt not owed.” Communication tactics accounted for another 20 percent of complaints, followed by “Disclosure verification of debt” at 18 percent.

The initial categories, while helpful, do not really explain why the consumer was compelled to log a complaint. The real reasons for complaints are revealed in the next step, sub-issue selection. 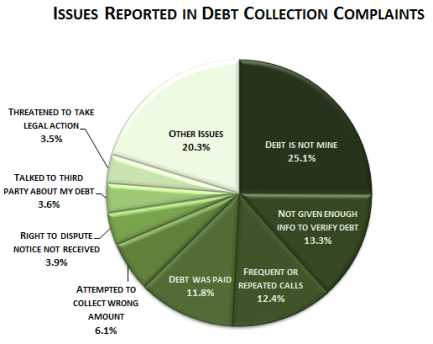 When taken in total, more than half – 51.5 percent – of complaints are indicating that the consumer thinks the debt should not be paid, one way or another. 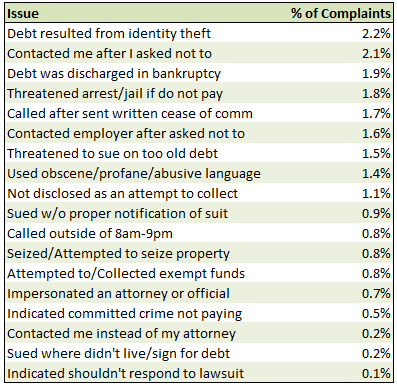 Every day the Consumer Financial Protection Bureau (CFPB) adds new consumer complaints to its public database. Even in the short time since debt collection complaints were added to the roster, the data shows that more people are complaining about debt collectors chasing the wrong person.

Our analysis of the initial complaints data showed that 24.6 percent of consumers claimed that the debt was not theirs. That number increased to 25.1 percent in just three weeks.