Lawsuits against ARM firms citing violations of the FDCPA increased slightly in July, but were still on pace to finish far below the number filed in 2013. TCPA lawsuits also bucked their 2014 trend by decreasing on a month-over-month basis, but still remain on pace to grow significantly for the year.

In July 2014, there were 828 lawsuits filed in U.S. district courts claiming violations of the Fair Debt Collection Practices Act (FDCPA), up 1.6 percent from June, but down seven percent from the number filed in July 2013, according to data provided by WebRecon LLC.

WebRecon in July, for the first time ever, released data on class action cases under the statute. Nearly 10 percent of FDCPA cases were class actions in July.

Even though there was a slight increase in July, the number of FDCPA suits are still 12.4 percent below the number filed through July 2013. If the pattern for FDCPA suit filings holds, 2014 will be the third straight year of declines after years of steady growth. Moreover, 2014 could see the largest decline yet in total FDCPA lawsuit filings. 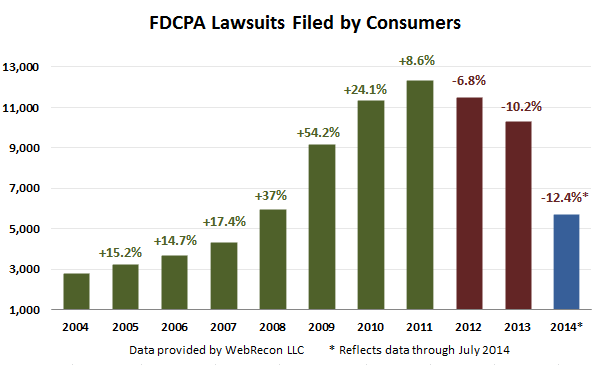 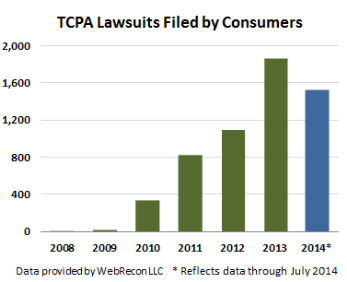 While FDCPA suits decline, TCPA suits have been enjoying a meteoric rise over the past few years. There are several possible reasons for this: a shifting legal environment involving TCPA cases leading to the type of ambiguity consumer attorneys love, a rise in the volume of attempts made to cell numbers driven by consumer habits, and a statute with higher possible payouts becoming the preferred target for consumers.

WebRecon noted in their July data that 32 percent of all plaintiffs in suits filed last month were repeat filers, having filed similar litigation in the past.

Collection agencies are scrambling to understand how to protect themselves against these suits and how to defend them when they are filed. insideARM.com today published To the Point: Lawsuit and Complaint Data, a report derived from an excellent webinar recently held on the topic.

Arm yourself with data from this report that reveals what consumers and their attorneys focus on in suits and what consumers are complaining about to the CFPB. Learn more.

Next Article: ALERT: Last Day to Comment on CFPB ...