FTC Data: Most Collection Agencies Receive Only One Complaint per Month 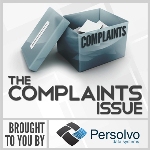 Earlier this year, insideARM.com made a Freedom of Information Act (FOIA) request to the Federal Trade Commission (FTC) for all collector complaint data from January 2012. We received spreadsheets containing 14,266 records. We sliced and analyzed the data in a variety of ways to begin to provide more insight into what makes up the so often quoted, “180,000 debt collection complaints.”

Below, you’ll find an analysis of what the records included, and how the complaints got the FTC in the first place. To see what consumers actually complained about, read “Complaints About Debt Collectors Going After Wrong Debt Top List in January.” 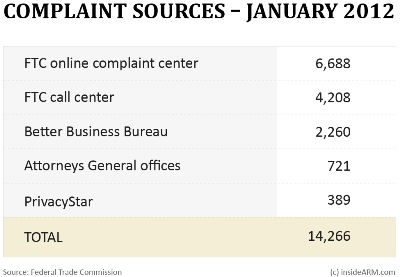 Consumer complaints come to the FTC in five primary ways: Through the online FTC complaint center, through the FTC call center, via the Better Business Bureau, via PrivacyStar, and via offices of Attorneys General.

One of the data fields included is called “Complaint Info Product Service Description,” and is the primary field that governs how the complaint is categorized.  For January 2012, three categories represented over 99% of all complaints. 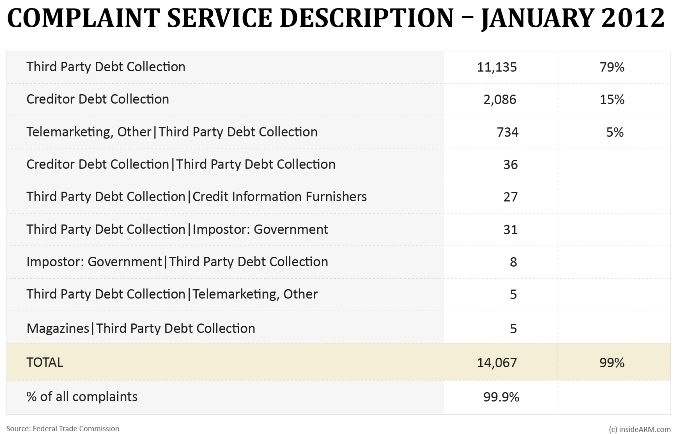 We thought it would be useful to identify how many different third-party collection firms were named in complaints. This was so not easy to determine. Better Business Bureau complaints are “clean,” in that they have common spelling of the same name (i.e. all instances of ABC Company are listed as such, vs. A.B.C. Company, just ABC, or ABC Co., etc.). FTC complaints, on the other hand, reflect raw data as entered by the consumer or FTC call center representative. As a result, those line items required manual manipulation in order to provide a useful view. Where we felt the intended firm was obvious, we consolidated under a consistent spelling. If there was a doubt, we left the items separate; there are likely an additional hundred or so complaints that could have been consolidated. 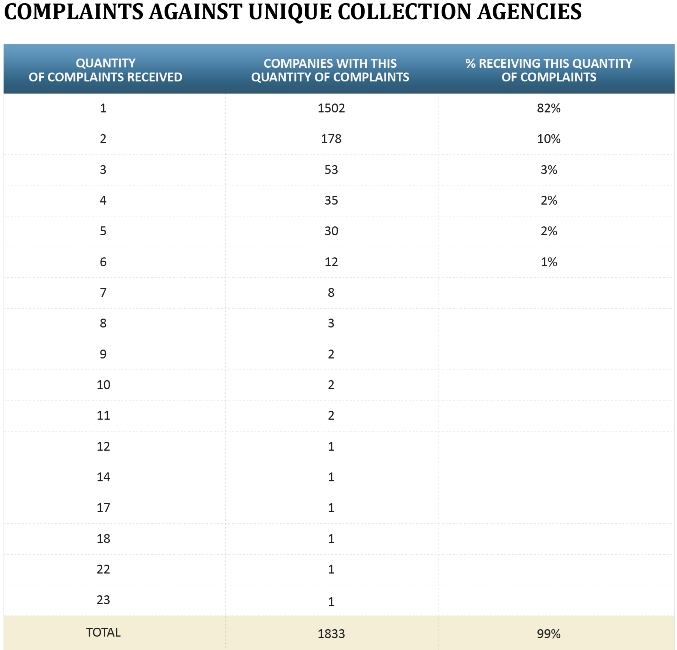 Worth noting as well is that there were cases where the named company was not a third party agency but a creditor, such as AT&T or Bank of America, or a firm providing cash advances. There were also quite a few nondescript names listed, such as “Bureau of Injunctions & Complaints” or other names that seem suspiciously similar to names used by debt collection scams.

We counted approximately 130 companies that appear to be creditors, and 231 “company names” that are insufficient to identify the company being complained about.