The 13-page booklet, Cobradores de Deuda, covers basic laws governing the behavior of debt collectors. It begins with a mother telling her son that she received a phone call from a debt collector regarding a potential debt owed by the son. The mother gets information on a Spanish-language seminar on debt collection laws and passes it on to her son.

At the seminar, the son learns about what debt collectors cannot do, including calling at inappropriate times, threatening arrest or deportation, and discussing the debt with a third party. The seminar conductor also tells attendees that they have the right to dispute the debt. If there are any issues with debt collectors, consumers should call the FTC. 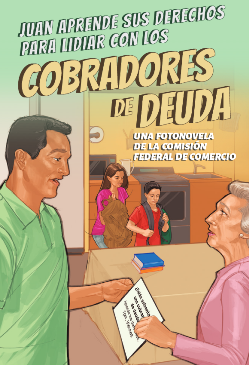 “Juan learns his rights when dealing with Debt Collectors”

The publication is part of the FTC’s fotonovela series, a campaign to promote consumer education and protection in the Latino community. Previous issues focused on government imposters and income scams. Consumers can order print copies of all three free publications or download and read them at ftc.gov/fotonovela. The fotonovelas are available only in Spanish.