The percentage of Americans with at least one account in the third party debt collection system fell to a post-financial crisis low in the fourth quarter of 2014, according to a report released Tuesday by the Federal Reserve Bank of New York. The average balance of accounts in collection also fell for a second straight quarter.

In Q4 2014, about 13.5 percent of Americans had at least one account in the third party debt collection system, down from 13.9 percent in Q3 2014 and 14.3 percent in Q2. It marks the lowest level for the measurement since Q4 2008, the early days of the financial crisis and recession. 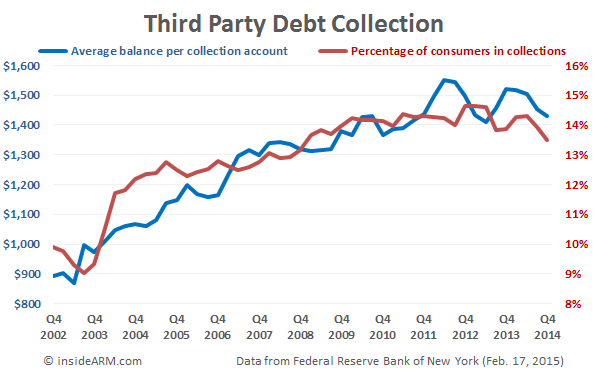 Overall, the report showed that total household indebtedness grew $306 billion over 2014 to stand at $11.83 trillion at the end of the year. The figure includes mortgages.

Mortgages and student loans led the way for gains in the quarter, adding $39 billion and $31 billion respectively. Total student loan has separated somewhat from auto loan debt to claim the second-largest debt type at $1.16 trillion compared to $955 billion for auto loans.