In the first three months of 2015, more debt collection complaints were published by the Consumer Financial Protection Bureau (CFPB) than in any previous quarter. The record period was driven by a big jump in complaints in March, with the total likely to rise even more over the next few weeks.

Much of the quarterly increase was due to a surge in complaints in March. Last month saw 3,724 complaints published, the most in any single month since the CFPB began taking debt collection complaints. And the total for March is likely to increase slightly over the next few weeks as more late-March complaints meet the CFPB’s criteria for publishing.

The CFPB’s complaint database, Consumer Response, lists only complaints submitted to the Bureau that companies have had an opportunity to respond to, and does not include complaints referred to other regulatory agencies, complaints found to be incomplete, or complaints that are pending with the consumer or the CFPB. 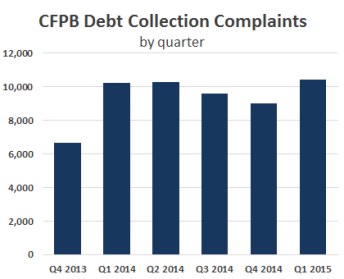 After an initial spike in the first and second quarters of 2014, quarterly collection complaints declined over the second half of last year. The action picked up at the beginning of 2015, with March’s large increase pushing the first three months of 2015 into record territory.

The trend of medical debt taking up a larger share of debt collection complaints continued in Q1 2014, with 14.1 percent of all complaints related to healthcare debt. That was up from 13.6 percent in Q4 2014 and significantly higher than the 9.5 percent reading in Q1 2014.

Consumers also stuck to their normal patterns with the reason they logged debt collection complaints. The most popular choice in Q1 2015, by far, was “Debt is not mine,” the same as every month and quarter. The next two most common reasons given for a complaint also call into account the validity of the debt collection effort: “Debt was paid,” and “Cannot verify debt.” 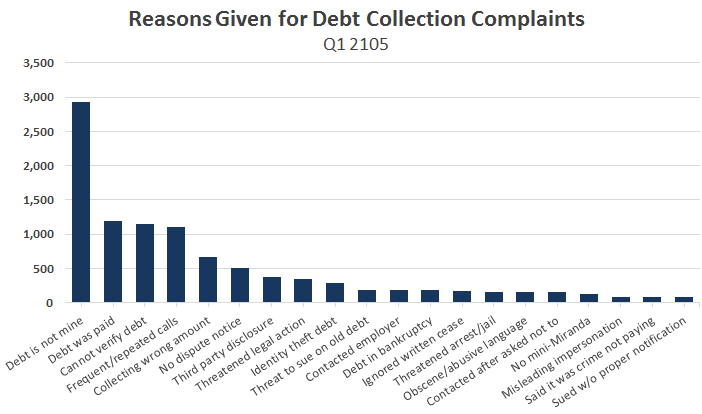