Drilling Down on a Prediction: The Biggest Source of Collection Work

Last week, I teamed up with renowned industry expert and my good friend Rozanne Andersen to host a webinar focused on trends shaping the ARM industry.  We addressed important topics including client developments, technology advancements, timely regulatory matters and the changing landscape of mergers and acquisitions. Rozanne and I also made a number of bold predictions about the future of ARM.

I will elaborate on one of them today and I will cover some of the others in future blog posts.

Government will become the single largest source of new business for ARM service providers for the next decade.

When you factor in the U.S. Department of Education, other segments of the Federal Government that I am confident will be outsourced to 3rd party professionals, and what has been developing at the state and city level, government will easily replace financial services which was king of the hill in placement volumes for 15 years leading up to the great recession. 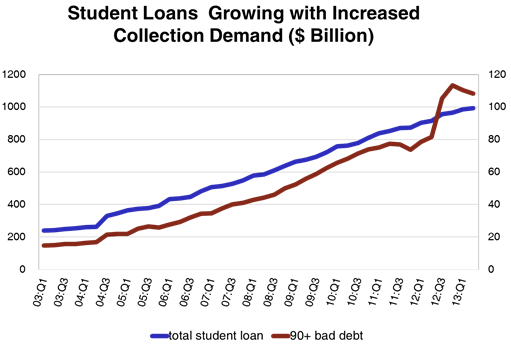 The U.S. student loan market increased to $1 trillion in 2013 with over $100 billion in delinquencies.  Since Q1 2012, the 90 days plus delinquent debt increased at a much faster rate than the total amount of student loans issued. There has been an exodus of private lenders leaving the student loan space since the Obama administration began originating loans directly in 2010.  As a result, about 85% of outstanding loans are now coming from the Federal Government, a trend we think will continue into the foreseeable future until direct lenders re-enter the market.

In addition to student loans, the U.S. Federal Government marked $56.2 billion individual tax debts and $53.7 billion business tax debts as uncollectable in 2012, a market that has the potential to be outsourced to third-party collection agencies.

More and more states and municipalities are turning to collection agencies to recover past due accounts receivable, creating a growth market for those focused on this sector. California leads the pack with non-tax bad debt of 24%, followed by Ohio at 16% and New Jersey closely behind at 14%. The delinquency rate mirrors the performance of the real estate market and the high unemployment rates in these regions.

When governments are faced with choice of cutting spending and/or increasing taxes to balance budgets, outsourcing collection matters looks enticing.