The percentage of American consumers with at least one account in the third party debt collection system increased slightly in the fourth quarter of 2013 while the average balance of accounts in collection jumped for the second straight quarter, according to data released this week by the Federal Reserve Bank of New York (FRBNY).

In its Quarterly Report on Household Debt and Credit, the FRBNY reported that percentage of U.S. consumers with at least one account in collections rose to 13.9 percent last quarter. In the third quarter of 2013, the same measure read 13.9 percent.

But the average balance of accounts in third party debt collection jumped to $1,520 in Q4 2013 from $1,458 in the previous quarter. It was the second quarter in a row that saw a significant increase in balance size as the average stood at $1,409 in Q2 2013.

The FRBNY’s report is compiled using a sample of Equifax credit reports which results in “a unique longitudinal quarterly panel of individuals and households.” The panel is a nationally representative 5% random sample of all individuals with a social security number and a credit report (usually aged 19 and over). 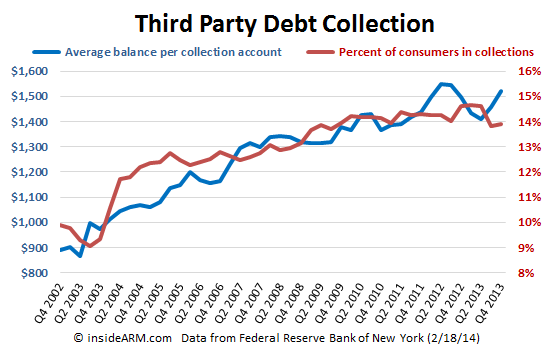 The New York Fed noted that its collection data includes both public record and account level third party collections information, and that only a small proportion of collections are related to credit accounts, with the majority of collection actions being associated with medical bills and utility bills.

For overall household credit, the report showed that outstanding household debt increased $241 billion from the previous quarter, the largest quarter over quarter increase since the third quarter of 2007. The increase was led primarily by a 1.9 percent increase in mortgage debt ($152 billion). In Q4 2013 total household indebtedness increased to $11.52 trillion; 2.1 percent higher than the previous quarter.  Overall household debt remains 9.1 percent below the peak of $12.68 trillion in Q3 2008.