Consumer credit outstanding in the U.S. increased at an annual rate of seven percent in November, mostly on the strength of auto and student lending, according to data released late Tuesday by the Federal Reserve.

Non-revolving debt outstanding, which is principally comprised of auto and student loans, grew by $15.2 billion in November, or at an annual rate of 9.4 percent. It was the largest monthly increase since June.

Credit card debt, meanwhile, expanded by a much more modest 1.1 percent annual rate, or by about $800 million in November. The slower growth in credit card debt, called revolving debt in the Fed’s monthly consumer credit report (G.19), in November followed fairly strong growth in October of $3.5 billion, an annualized rate of 4.8 percent. Credit card growth in 2012 is on pace to exceed five percent. 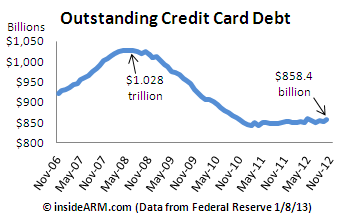 Total credit card debt outstanding was $858.4 billion at the end of November, representing slow and steady growth from the beginning of 2011 after a monumental two-year slide in the wake of the credit crisis. Credit card debt peaked at more than $1 trillion in mid-2008.

Although the gains in November were modest, it marked only the second time in 2012 that credit card debt expanded in two consecutive months, after February and March earlier in the year. 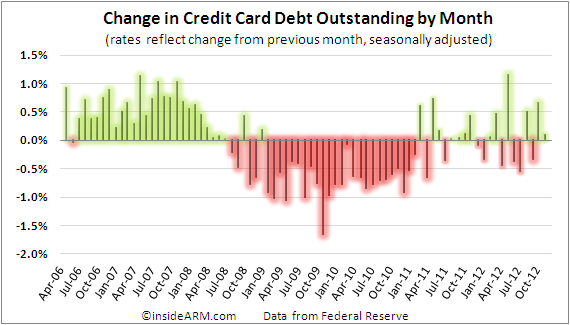 Next Article: Persolvo Data Systems to Present at the ...