First Look: Obama Budget Spreads the $370 Billion in Medicare Cuts All Around

President Obama’s budget proposal cuts Medicare by $370 billion, but contrary to earlier reports that most of those reductions would fall on providers, the administration also will look  to pharmaceutical companies and beneficiaries to share the pain.

The proposed budget will be released later today, but senior administration officials met with reporters to give them a preview.

As reported earlier, the president’s budget plan, at least as far as healthcare is concerned, is the same one he presented privately to House Speaker John Boehner last fall. ”That offer is still on the table,” a member of the White House told reporters, according to Politico.

For healthcare providers, the president’s budget would cut reimbursements, including those for bad debt, by $30 billion. Post-acute care providers face a $50 billion reduction.

More than a third of the cuts, $140 billion, would come in the form of reduced reimbursements to the pharmaceutical industry for Medicare Part D drug rebates. According to Politico, this represents the largest reduction of any single program in the proposed budget. The pharma industry is expected to lobby heavy to oppose the cuts, but has come under attack recently for generating high margins, in part from Medicare reimbursements.

For beneficiaries, the president’s budget proposes that those with higher incomes will pay larger premiums for Medicare Part B and Part D. The bad news for providers is that the proposal also will “discourage seniors from purchasing first-dollar Medigap insurance that covers co-pays and other cost-sharing requirements in the program,” which will put the burden of collecting those costs onto providers.

According to CNN Money, the president’s budget was built by changing how inflation is measured, thereby affecting those programs that are linked to the increase in the cost of living. By “chaining” the budget to the consumer price index (CPI), those receiving Social Security and veterans benefits will begin receiving smaller increases. Some Medicare reimbursement rates are linked to inflation, and therefore providers can expect smaller increases in the coming years if the president’s plan is approved.

Many of the specifics of the president’s budget proposal are ominous, especially for providers (see the White House chart below). The target cuts include $120 billion in “other health savings,” the second largest reduction proposed by no explanation as to where those savings will originate. 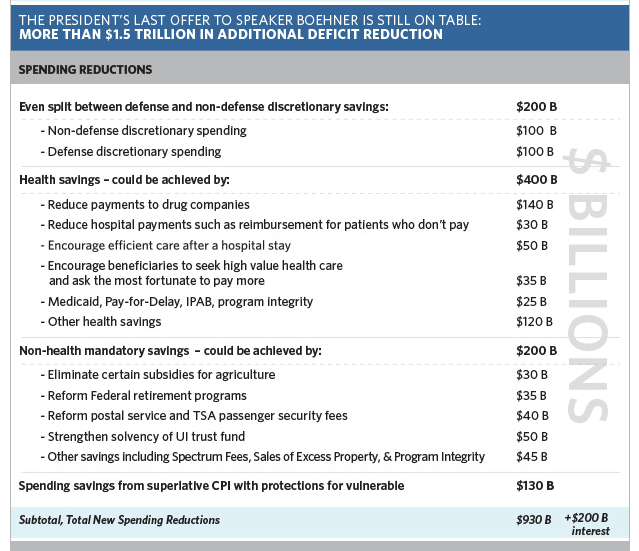 Next Article: Debt Collection Complaints Already Showing Up in ...