The U.S. economy added 214,000 jobs in October 2014, according to data released early Friday by the Labor Department. With upward revisions to previous August and September, it marks the ninth straight month that has seen job growth over 200,000.

The official number, taken from a survey of U.S. employers, was slightly below economists’ expectations of roughly 230,000 additional jobs. But data from the two previous months were revised upward by a total of 31,000 jobs, making up the difference.

October’s official unemployment rate was reported as 5.8 percent, down from 5.9 percent in the previous month. It’s the lowest unemployment rate since July 2008, the month mortgage giant IndyMac failed and filed for bankruptcy protection, essentially marking the public beginning of the financial crisis. 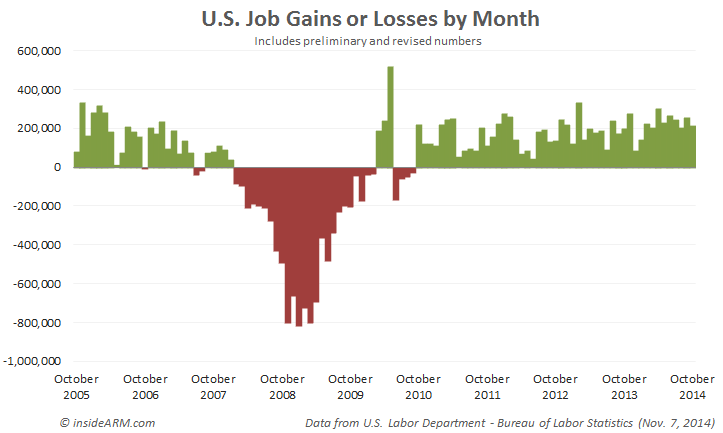 A separate survey of households showed the labor participation rate edge up very slightly to 62.8 percent from 62.7 percent. Likewise, the employment to population ratio rose two percentage points to 59.2 percent.

The slight increase in labor participation, combined with the slight decrease in the official unemployment rate, sent a closely-watched alternative measure of unemployment rate down. The U-6 figure, which measures total unemployed plus discouraged and marginally attached workers and those working part-time against their will, was 11.5 percent in October, down from 11.8 percent in September. That number is down significantly over the past year, with the U-6 reading of 13.7 percent in October 2013.

In what continues to be a frustrating trend for both American workers and economists, wages grew just 3 cents in the month to an hourly average of $24.57 for all workers. Wages over the past year have grown at an annual rate of two percent, a figure economists say is too low to support a robust economic recovery and expansion.

Next Article: Gauging the Impact of the Election on ...