Data can be accurate, but without context it could mislead. That was the message former CFPB Senior Advisor Jim McCarthy delivered to industry attendees of last week’s insideARM Larger Market Participant Summit in Washington, D.C.

The CFPB cares about data and accuracy, McCarthy noted, but it is not pairing collections complaint data with necessary context before it presents that data to the general public. And so long as that context is missing, CFPB complaint data could mislead the general public and the media about the nature of the collections industry, McCarthy warned.

McCarthy urged the collections industry to be good stewards of the complaint data in whole and to press the regulator to continue to improve data and transparency standards when it comes to collections complaint data.

Many, perhaps most of those unattributed complaints likely belong to the bad actors in the industry – firms who have no interest in joining the CFPB complaint portal, investigating consumer complaints or in improving their processes. However, the Bureau often uses the full set of complaints, routed and un-routed, when analyzing collections complaint data for their Congressional Report and when it presents the Annual Consumer Response Report to the public. When the Bureau lumps complaint data involving unresponsive collections firms in with data pertaining to firms which do respond to complaints, it skews perceptions of the industry. 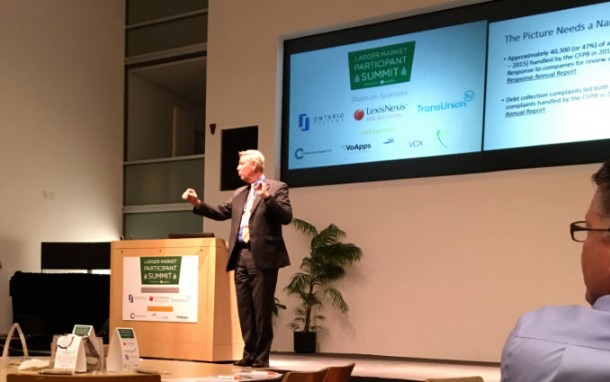 Specifically, Bureau reports note that collections complaints lead daily and monthly volume of complaints handled in 2015. The CFPB’s annual report also notes that only 47% of debt collection complaints are even sent to a company for response. That doesn’t sound so hot. And that’s the impression the public and the media take away from the CFPB’s report. If the Bureau reported on the performance or attributes only of complaints routed to a company for a response, the bureau’s reports would better communicate how the “responsive” debt collectors perform.

The Bureau doesn’t need to change methodologies, but it should explain those methodologies and what they actually measure, McCarthy said. “The CFPB doesn’t provide any context here to allow readers to understand that those complaints are not actually two separate complaints,” he adds.

What should the industry do? Explain the need for context, McCarthy argued. The industry has to make regular, reasonable arguments to the CFPB that the way it presents its data is not complete, that it lacks necessary context, and that CFPB data, as currently contextualized, can lead to a misleading view of the collections industry.

McCarthy believes the CFPB will make changes to the way it contextualizes industry data if the industry makes a cogent argument in favor of it.

“The CFPB is not interested in making errors,” McCarthy said. “So, when the industry points out those errors, the CFPB will react.”

insideARM has written extensively in the past about debt collection complaints and their lack of context. In a July 2015 article, insideARM CEO Stephanie Eidelman estimated that the true percentage of complaints against actual legitimate firms was likely 30-40% of the total number reported. The following is excerpted from that post: