In its first full year of taking and publishing consumer complaints about debt collection, the Consumer Financial Protection Bureau (CFPB) made public just over 39,000 grievances logged against collection agencies, debt buyers, and creditors for actions taken in the debt recovery process.

The total from the full year 2014 – 39,130, to be exact – may come as a surprise to ARM professionals used to seeing annual debt collection complaint totals released by the FTC well north of 100,000.

The CFPB’s complaint database, Consumer Response, lists only complaints submitted to the Bureau that companies have had an opportunity to respond to, and does not include complaints referred to other regulatory agencies, complaints found to be incomplete, or complaints that are pending with the consumer or the CFPB. For this reason, the total volume of complaints it publishes is much lower than the complaint numbers previously released by the FTC.

There was volume variability from month to month in 2014, but generally debt collection complaints fell into a relatively tight range, averaging just over 3,200 published complaints each month.

What Consumers Complained About

The CFPB’s complaints wizard steps consumers through the submission process with standardized fields on each screen. 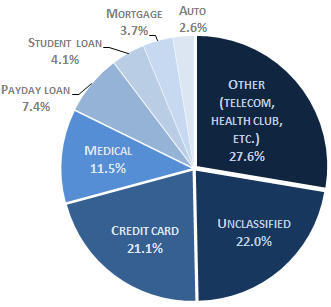 First, consumers must choose which type of debt led to the collection complaint. The most common debt type in 2014 was “Other,” comprising 27.6 percent of all debt collection complaints. The “Other” category covers debts stemming from telecom, health club memberships, cable service, and other similar accounts. Next was “Unclassified” complaints, in which the consumer did not select the account type, with 22 percent.

The CFPB is taking a long look at Medical debt, one of the only types of accounts it monitors that doesn’t represent a true credit transaction. It underscored that point recently with its study and action on medical debt in collection as it relates to credit reporting.

Next, consumers tell the CFPB what they are complaining about. There is a dropdown with a few options, and then a few more trigger depending on the first selection. That second level, the “Sub-issue,” lets regulators know exactly what prompted the complaint.

The most common issue in every month of 2014 was “The debt is not mine.” For the year, more than a quarter of all debt collection complaints, 25.7 percent, claimed that the debt being collected was not the responsibility of the consumer being contacted. Combined with 4,262 consumer that said the “Debt was paid,” and another 4659 that said the debt could not be verified, almost half – 48.6 percent – felt they should not be subjected to collection action. 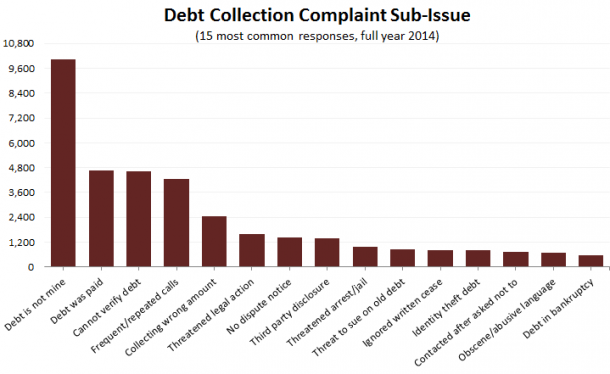 Who Consumers Complained About

One of the main issues the debt industry has with the nature of the Consumer Response database is the public naming of companies receiving the complaint. In 2014, a total of 1,759 companies were named in collection complaints. Nearly all were either a collection agency, creditor, debt buyer, or payday lender. 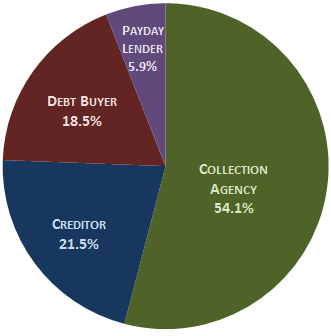 insideARM.com analyzed the top 240 companies and assigned business types for each. The complaints made against these companies accounted for 76 percent of all complaints filed in 2014.

What the Companies Did About the Complaints

When Consumer Response receives a complaint, the CFPB forwards it to the company named by the consumer. The company must then evaluate the complaint and respond with their proposed resolution or answer to close the complaint. 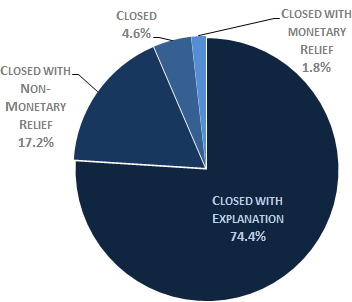 The most common option taken by ARM companies in 2014, by far, was Closed with Explanation. Here, a company provides a written response to the consumer and the CFPB explaining what happened and why no additional action will be taken. That option comprised 74.4 percent of all debt collection complaints in 2014.

Closed with Non-Monetary relief was next, at 17.2 percent. In this closing tactic, a company will offer some type of relief that does not involve money, such as changing a credit report tradeline. Less than five percent of complaints were simply closed with no explanation or relief. Finally, only 1.8 percent of debt collection complaints resulted in monetary relief in 2014.

How to Build a Digital RFP and Measure Success of a Digital Strategy- Session 1: The Basics