The percentage of Americans with at least one account in third party collections rose to an all-time high in the fourth quarter of 2012, according to the Federal Reserve Bank of New York. The average account balance of those in collection decreased.

In its Quarterly Report on Household Debt and Credit for the fourth quarter of 2012, the Federal Reserve Bank of New York (FRBNY) noted that 14.6 percent of American consumers had an account in the third party debt collection system, up from 14 percent in the third quarter. Since peaking at 14.38 percent in the second quarter of 2011, the percentage of consumers in collections had steadily fallen. But the spike in the number for the fourth quarter shattered the old record. 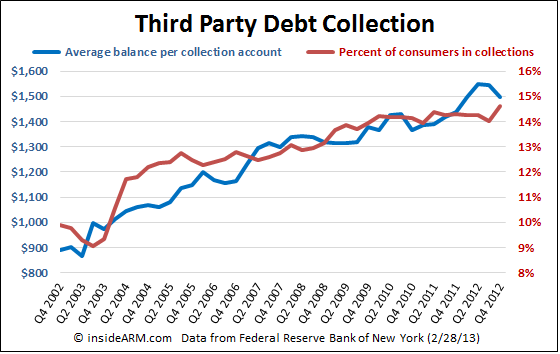 The Quarterly Report on Household Debt and Credit is based on data from the New York Fed’s Consumer Credit Panel, a nationally representative random sample drawn from Equifax credit report data.

Total consumer indebtedness was $11.34 trillion, 0.3 percent higher than the previous quarter but considerably lower than its peak of $12.68 trillion in the third quarter of 2008. While outstanding mortgage debt remained roughly flat, originations of new mortgages rose to $553 billion, a fifth consecutive quarterly increase.

Non-housing debt balances increased for the third straight quarter and now stand at $2.75 trillion, up 1.3 percent in the fourth quarter.  All non-housing components increased; auto loans up $15 billion, student loans up $10 billion and credit cards up $5 billion.

“The data provides early evidence that consumers may be reaching the end of the four year deleveraging cycle, though we’ll need to see if this is sustained in upcoming quarters,” said Andrew Haughwout, vice president and economist at the New York Fed. “At the same time, we observed mixed developments, mortgage originations increased and fewer accounts entered the foreclosure pipeline but delinquency rates remain considerably higher than pre-crisis levels.”

Next Article: FELA Partners with Debt Buyer on 'Debt ...