In the first quarter of 2014, the percentage of consumers that filed complaints against debt collectors claiming that the debt in question was not theirs increased to more than 40 percent of all complaints.

There was also some movement in the “Sub-product” complaint category, the field used to distinguish what type of debt underlies the complaint. The most commonly-cited sub-product is the CFPB’s “Other” category, accounting for 26.7 percent of all complaints. But this category will change over time as the CFPB’s Consumer Response unit adds more debt types to the choices given to consumers. 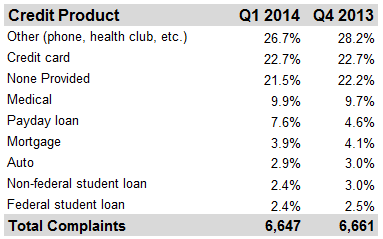 This was borne out in the first quarter statistics as the Payday Loan category recorded a significant increase, from 4.6 percent of all complaints in Q4 2013 to 7.6 percent in Q1 2014. The CFPB added Payday Loan as an option in early November last year, so the fourth quarter numbers were skewed lower. Since that option was available for all of Q1 2014, the 7.6 percent figure is probably closer to accurate.

Tomorrow, we’ll look at what type of ARM company the complaints were logged against.

Next Article: Consumer Delinquencies Fall in Most Debt Categories ...