The envelope promised “Debt Cancellation God’s Way!” Of course we had to open it.

But before we get into the letter itself — and it’s glorious — some ground rules: Faith is a powerful mover in many people’s lives. It’s a comforter and a compass — and it can be a very personal experience. So, what we’re challenging here at insideARM.com in the five insane pages (plus secret mystery envelope! Stay tuned!) is not faith. It’s a scam that would exploit faith for gain.

So, we’ll start with page 1, because we’re methodical. 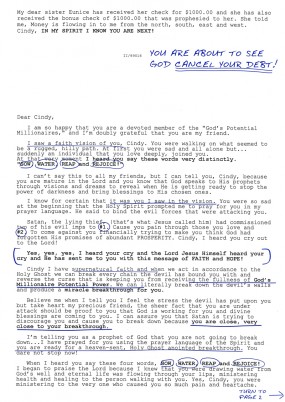 It looks like a typed letter. An old-timey typed letter, like on a typewriter (in your 30s? Don’t know what a typewriter is? Ask an adult!) — only it looks like someone intercepted it before it got to you and decided to make hastily scribbled notes all over the place in blue ballpoint pen. This bumps the creepiness factor up by at least the power of 10, because the effect is now along the lines of: Someone is intercepting your mail and will soon be hiding in your hallway closet.

The language is gross and intimate: “I’m doubly grateful that you are my friend,” “I can’t say this to all my friends.” It’s like that creepy guy at a bar who pretends to know you — “We’ve met before, right? At Hunter’s party?” — and then he’s ordering drinks for you and talking about how you smell like Catalina. No, not the dressing, the islands. (Though, in my case, it’s probably the dressing. I’m a sloppy eater. Email anyone in the office for details.)

Later, the letter takes a sinister turn: you’re beset by demons and imps who want to rob you of your prosperity. (Maybe there are malls in Hell? Or some charming boutiques? I don’t know what the demons and imps will do with the cash, but we know it won’t be for comfy sweaters in delicious colors perfect for the fall season. Or leggings.) The writer also tries to establish that the very fact that you’re super poor right now (what with all the imps and demons and sweater capes! That’s another thing they probably don’t sell at the Eileen Fisher in Hell) means that everything is going according to God’s plan!

Next Article: Legislation to Modernize the TCPA Introduced in ...