Reality is tricky and generally uncooperative. In my mind, for instance, I’m lithe, limber, and carry my stunningly attractive head on my swanlike neck. 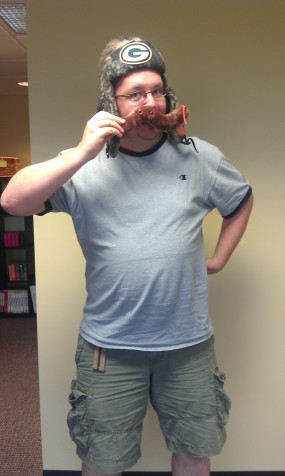 You're ALL invited to my baby shower! I'm having all the babies!

Currently, Walsh’s talking-point is: “I won’t place one more dollar of debt upon the backs of my kids.” Fair enough. But it’s probably because he knows his kids can’t afford to pay any debt back: Walsh owes his wife and kids over $100,000 in child support and alimony.

Walsh’s Tea Party street-cred is based primarily from his Mean Streets backstory: he spent a lot his life living in poverty, even losing his townhouse to foreclosure. His rags-to-riches story made for a compelling campaign — but also confused his wife, Laura, who filed for divorce from Walsh back in 2002.

In 2004, Laura Walsh complained in a motion that for a man living in poverty, her ex-husband appeared to be taking a lot of vacations to Mexico and Italy. Walsh’s continued excuse for not always making his child support/alimony payments was being out of work or “between jobs.” Later, during the campaign, Laura Walsh learned that her ex-husband, who wasn’t always able to support his family, was able to personally loan his campaign $35,000.

Which is what gets Joe Walsh today’s Doing it Wrong slot (followed by yours truly for not getting fitness right at all): Maybe before one takes to the pulpit to decry the spending of others, one should make sure that one isn’t in an awkward position regarding one’s own spending JOE.

The disagreement isn’t at all over whether or not the country is or is not spending enough (or not enough). You can even safely take the position that someone else isn’t spending correctly and base that on the fact that you recognize incorrect spending as pulled from your own life. What you can’t do? Is then suggest that you’re the person for the job of correcting the spending problem when you haven’t got a handle on that aspect of your own life.

But, because I’m trying this new thing where I balance a negative comment with a positive one: dude’s got AMAZING teeth.