Why Everyone Keeps Talking About Student Loans

In short, student loan debt is now the largest single consumer debt class outside of mortgages. Larger than credit cards, larger than auto loans, outstanding balances on loans to pay for college dwarf everything else.

The Federal Reserve Bank of New York said in November that through the third quarter of 2013, outstanding student loan balances stood at $1.026 trillion. It’s the first time the New York Fed, in its fantastic quarterly Household Debt and Credit Report, has reported a total above $1 trillion. But others have done so before.

The Consumer Financial Protection Bureau (CFPB) recently estimated that at the end of 2011, there was a little more than $1 trillion in outstanding student loans in the U.S.: $864 billion in federally-backed and direct loans, and $150 billion in student loans from private lenders.

But the most staggering figures of student loan indebtedness aren’t necessarily tied to total market size. Instead, the astounding recent growth in outstanding education debt has given ARM executives plenty of reason to talk about student loans.

But it’s not simply a recent development. The New York Fed in May reported that since the peak in household debt in mid-2008, student loan debt has increased by $293 billion, while other forms of debt fell a combined $1.53 trillion. Plotting the FRBNY data back to 2003 shows that auto and credit card debt followed the recession: peaking just before mid-2008, declining for two years, then growing again. But student loan debt has charted a much different path: 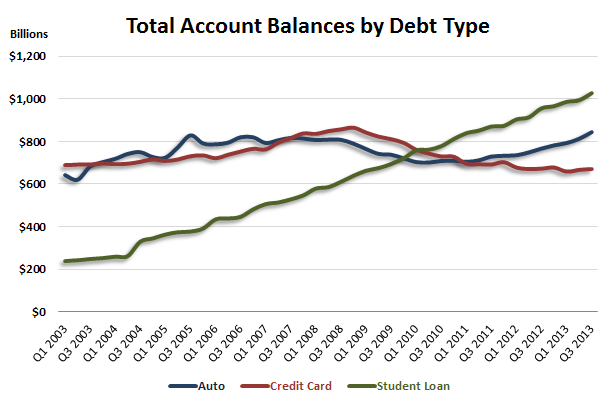 But more than just shear market size and rapid growth, borrowers are going delinquent on student loans at a far faster rate than other loan types.

In Q3 2013, student loans had – by far – the largest total balance of newly-delinquent accounts (defined by the FRBNY as 30+ days past due): 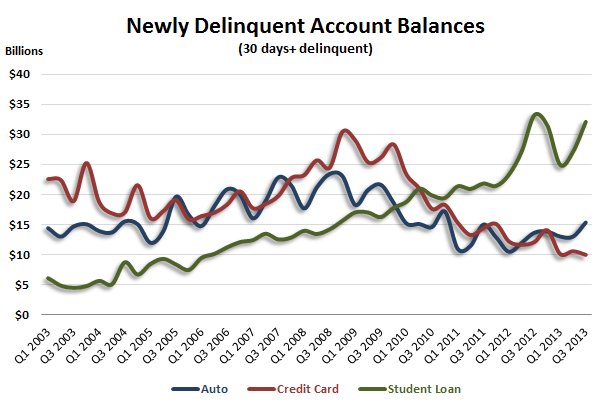 The student loan market has long been very popular with the ARM industry for many reasons. But it was always a sector that favored a few select players. The enormous recent grow in student loan debt, however, has everyone talking about it, and for good reason.

This article originally appeared in the latest issue of Know Your Debtor, a free quarterly newsletter focused on the U.S. consumer environment. Make sure you’re registered to receive insideARM’s newsletters on your User Profile page.

Next Article: Three Reforms to Fix the RAC System ...