The percentage of American consumers with at least one account in the third party debt collection system fell sharply in the third quarter of 2013, according to data released Thursday by the Federal Reserve Bank of New York (FRBNY).

In its Quarterly Report on Household Debt and Credit, the FRBNY reported that percentage of U.S. consumers with at least one account in collections fell to 13.8 percent last quarter. In the second quarter of 2013, the same measure read 14.6 percent. It was the largest quarter-over-quarter decline since the group started tracking the metric in 1999.

The FRBNY’s report is compiled using a sample of Equifax credit reports which results in “a unique longitudinal quarterly panel of individuals and households.” The panel is a nationally representative 5% random sample of all individuals with a social security number and a credit report (usually aged 19 and over).

While the percentage of consumers with accounts in the third party debt collection system fell in the third quarter, the average account balance in collection jumped to $1,458 from $1,409 in the second quarter of 2013. The average balance of collection accounts had been declining over the previous five quarters. 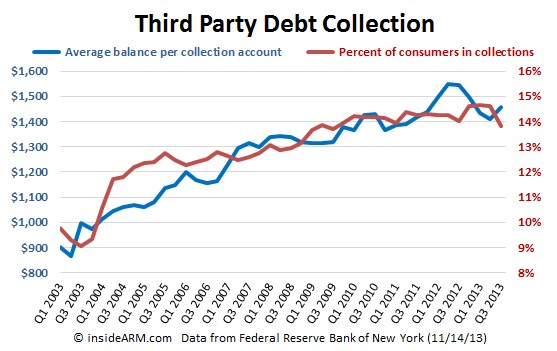 The drop in the number of collection accounts coupled with the rise in average balance most likely indicates that many consumers paid down smaller accounts in collection in the quarter, leaving higher-balance accounts to be included in the data.

New York Fed noted that its collection data includes both public record and account level third party collections information, and that only a small proportion of collections are related to credit accounts, with the majority of collection actions being associated with medical bills and utility bills.

Overall, the FRBNY report showed that outstanding household debt in Q3 2013 increased $127 billion from the previous quarter, the largest increase since the first quarter of 2008. The increase was due to rises in mortgage balances ($56 billion), student loans ($33 billion), auto loans ($31 billion) and credit card debt ($4 billion).

“This quarter, we observed an increase of household balances across essentially all types of debt,” said Donghoon Lee, senior research economist at the New York Fed. “With non-housing debt consistently increasing and the factors pushing down mortgage balances waning, it appears that households have crossed a turning point in the deleveraging cycle.”