Even as the overall economy added 117,000 jobs in July, dialing back the official U.S. unemployment rate to 9.1 percent, nobody’s grandmother is ready to whip out the fancy cashews instead of that dish of plain old mixed nuts when the company arrives. On the heels of an acrimonious debt ceiling mêlée in Congress, S&P’s historic downgrade of the U.S. government’s credit rating, and last Thursday’s 512 point drop in the Dow Jones Industrial Average—the biggest one day drop since December 2008—lots and lots of peanuts appear to be in America’s future.

But the news isn’t entirely distasteful.  Data from insideARM’s ARM Barometer, a quarterly survey of collection agencies, debt buyers, collection law firms, and credit grantors showed that many ARM companies in the outsourced business services sector of the U.S. economy added jobs in the second quarter of 2011. 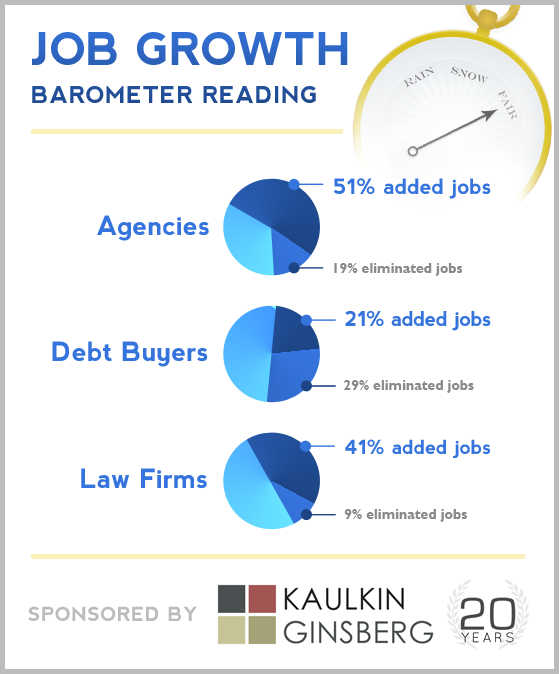 The significance of these numbers is tripartite.

First, more collectors should boost service providers’ recovery performance, meaning a greater number of outstanding receivables are being converted to cash and injected into the broader U.S. economy.

Third, this data serves as an important tool in opposing the negative images often ascribed to ARM companies.  From the misguided notion that recessionary periods are a boon for debt collectors to slipshod reporting common in many media reports about the collection industry that associate complaints about debt collectors with actual FDCPA violations or that tie any collection activity—a legitimate phone call or legal dunning notice—to abuse and harassment.

But a tool is only useful if you use it. How will you help build the reputation of the ARM industry today?

Michael Klozotsky is the managing editor of insideARM.com.  He’s not a statistician, but he knows enough of “the maths” to say that even when the “dreaded debt collection industry” adds jobs, a few more American families can eat, learn, play, and live a little better.