“Every negotiator has two kinds of interests: in the substance and in the relationship. Every negotiator wants to reach an agreement that satisfies his substantive interests. That is why one negotiates. Beyond that, a negotiator also has an interest in his relationship with the other side.” – Getting to Yes

One of my favorite books on the subject of negotiating is the 1981 classic, Getting to Yes: Negotiating Agreement Without Giving. This year marks the book’s 30th anniversary and its advice is every bit as relevant today as it was then.

I discovered the book early in my collection career while I was “learning the ropes.” A more seasoned – and successful – collector had the book on her desk, and one day I asked if I could borrow it over the weekend.  I took it home, read it cover to cover, and came back to the office on Monday with a new perspective on collecting past due accounts.

Prior to reading Getting to Yes, my modus operandi was to drive a hard bargain and see to it that my interests prevailed above all else. I viewed the collection call as a debate between two adversaries. Afterwards, however, I realized that the negotiating style used for a given situation depended on two very important details: Concern for the outcome and concern for the relationship. 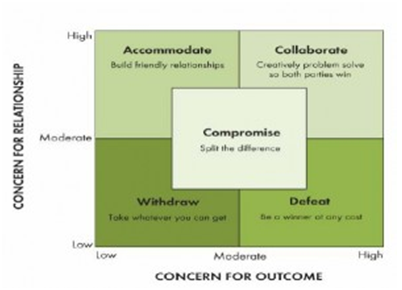 Every collector has these same two concerns during the collection process, and each collector has a varying degree of interest in the two. Each concern interacts with the other to produce a pattern of negotiating behavior called negotiating style. There are five negotiating styles: accommodate, collaborate, withdraw, compromise, and defeat (see below). Using the wrong style at the wrong time can lead to decreased collections and damaged relations. Alternatively, using the right style at the right time can improve negotiating effectiveness, and ultimately, collection success and customer satisfaction.

Collectors need to be aware of negotiating styles for two reasons:

Impact on Outcome – Negotiating styles impacts collection results because they influence the outcome of the call. Drive a hard bargain (defeat) and consumers might hang up the phone prematurely or refuse to make a payment because they feel powerless. Go with the soft bargaining approach (accommodate) and your left with undesirable payment arrangements, or worse, an empty hand. Indeed, principled negotiation (collaborate) aimed at creating a win-win seems like the wise alternative.

Impact on Relationship – Certain negotiating styles cause more damage to relationships than others.  Company collection philosophy and the importance of the relationship are two drivers that influence the desired negotiating style of the collection center. This is where third-party and first-party collection philosophies can differ. A first-party collector calling on a thirty day past due 10-year installment loan payment, for instance, might place more importance on the relationship than would a third-party collector attempting to collect a $500 credit card that was charged off six years ago.

There are many dynamics that contribute to the degree of interest a collector has in the two outcomes; however, understanding one’s instinctive negotiating style is a good place to start as it provides insight into underlying natural tendencies. Collectors who understand negotiating styles can more readily “flex” their style based on the individual circumstances of the call instead of relying on a one-size-fits all approach.

On May 20, Gary will share his experience and insight on the topic of negotiation for debt collectors as he facilitates Unlock the Hidden Power of Your Negotiating Style – a 90-minute assessment-based webinar event.

Gary Jensen is a 12-year veteran of the collection industry and has worked in both first- and third-party collection environments. He is the editor of collector mentor and also serves as a trainer, coach, and consultant to the industry. Additional details can be found here.