There are currently over 40 comprehensive consumer data privacy bills pending in the states as we enter the third month (for most states) of the legislative sessions.

Although the dread of the often-referenced “patchwork” of dissimilar state privacy laws still looms, the good news is that the majority of the bills are not moving, moving slowly, or dead.  Nevertheless, there are some that are working their way toward the finish line, and a few that appear to have come back from the dead, as explained below. 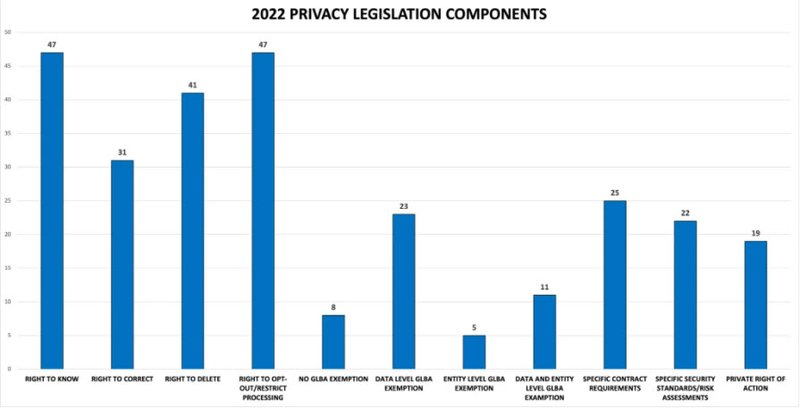 You can download a chart here that provides details about each of the 47 bills and their current legislative status.

WHAT WAS NEW IN FEBRUARY

Arizona HB 2790 was introduced Feb. 8, but apparently did not make it past the committee deadline of Feb. 18.

Indiana SB 358 was amended in the Senate, passed, and voted favorably out of the House committee on Feb. 17. Notably, the amendment removed the private right of action contained in the original version.

Ohio HB 376 was amended by committee substitute on Feb. 9.  Among other changes, the legislation now provides a consumer the right to request correction of inaccurate data.  This chart explains the numerous other differences between the introduced bill and the substitute.

Oklahoma HB 2969, the Oklahoma Computer Data Privacy Act, was introduced on Feb. 7, and amended by committee substitute on Feb. 21.  The substitute adds a prohibition against selling a consumer’s personal information to a third party without the consumer’s consent, i.e., “opt in.”

Washington HB 1433 has had no movement and is presumed dead.

WHAT’S AHEAD IN MARCH

Of the states with pending privacy legislation, six have crossover deadlines in March, and others have various committee and floor deadlines.  There are a handful of bills that are now in the second chamber or poised to be there soon, so it is possible that March could bring the passage of another comprehensive state data privacy law.