Yesterday the Consumer Financial Protection Bureau (Bureau) issued a report examining the early effects of the COVID-19 pandemic on consumer credit.  Based on credit record data, the Bureau’s research found that consumers have not experienced significant increases in delinquency or other negative credit outcomes since the onset of the COVID-19 pandemic.  The report focuses on mortgage, student and auto loans, and credit card accounts from March 2020 to June 2020.

According to the report,

Clearly, the CARES Act is largely behind these results. The report notes that the Act generally requires furnishers to report as current certain credit obligations for which they make payment accommodations to consumers affected by COVID-19. Since consumers receiving assistance can maintain a current account status rather than go, delinquent, the expectation is that there will be fewer month-to-month transitions into delinquency than would have been the case absent the CARES Act provisions. This is especially true for student loan accounts, for which the CARES Act automatically suspended payments and mandated furnishing requirements that apply to more than two-thirds of the market from March through September 30, 2020. On August 8, President Trump directed the Secretary to continue to suspend loan payments, stop collections, and waive interest on ED-held student loans until Dec. 31, 2020.

In addition to the aggregate study, the Bureau examined results by credit score group. The table below reflects their finding no evidence that delinquencies on major forms of credit increased during the early months of the COVID-19 pandemic, in contrast to the U.S. experience in the Great Recession. 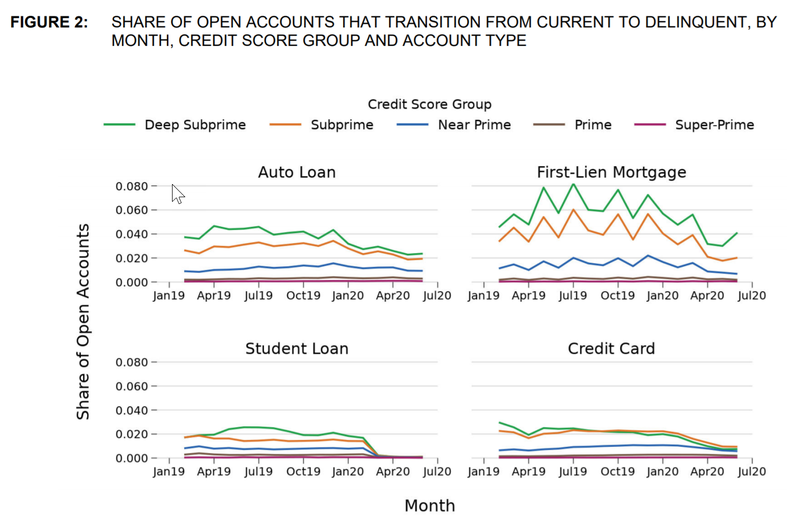 The Bureau concludes that at least part of the reason for the absence of delinquency impacts is likely the policy interventions at the federal, state and local levels. Beyond direct income supports such as higher unemployment insurance benefits, these policies include programs aimed specifically at providing payment assistance to consumers with certain types of credit.

Worthy of a final note is that the CFPB acknowledges what they consider to be important limitations of the study, due to its reliance on credit reporting data to be timely and accurate. Additionally, the report notes that the results only represent the experience of consumers with a credit report–roughly 90 percent of adults in the United States—and only with respect to those types of credit the Bureau focuses on. It's important to highlight that this report does not examine medical debt.

So, what does this portend for the debt collection industry over the coming months? In the early months of the pandemic, there was a clear trend of consumers using their available cash -- whether from the CARES Act, a reduction of spending, or other sources -- to pay down delinquent debts...for some debt types. This was positive for the industry, creditors, and consumers alike. No matter the reason, many consumers are in a better financial position, at least at the moment. This could mean that for at least some time, there will be a reduction in accounts placed with collection agencies.

Some suggest that, once the effects of the stimulus funds' July 31st end take effect, the delinquency picture will begin to look different, especially if the unemployment rate does not begin to fall. At a minimum, it seems that the future story for the debt collection industry will vary greatly by industry.

As for medical debt, this story has yet to play out. While hospitals have been extremely busy in recent months, they've been servicing Covid patients. President Trump has said the government will pay those bills. And Congress has kind of said that consumers won't have to pay those bills. Kaiser Health News reported at the end of May that "Since the passage of the Families First Coronavirus Response Act (FFCRA) on March 18, most people should not face costs for the COVID-19 test or associated costs." Most people. Should not. I think this story is yet to fully play out. What's also happened is that thousands of would-be patients put off routine or non-Covid-related procedures. So it will take time to replenish that receivables pipeline.

As for federal student loan debt collectors, the story has been disastrous. I predict there will be unintended consequences for consumers arising from the implementation of some elements of the CARES Act. As I wrote in this article back in June, the Act prohibited Private Collection Agencies from sending collection letters or making outbound collection calls to defaulted federal student loan borrowers, which means PCAs may not reach out to borrowers to inform them, for instance, that $0 payments to an Income-Driven Repayment Plan during the forbearance period would apply towards the requirement for forgiveness. But the borrower must be fully enrolled with completed documentation. The only way a borrower could learn about them is if they happen to read the FAQs on the Federal Student Aid website. This will only come to light months from now when it's too late.