The Federal Trade Commission announced this week that the Agency, along with consumer protection agencies in 33 other countries that are part of the International Consumer Protection and Enforcement Network (ICPEN), unveiled an updated version of ICPEN’s econsumer.gov to help law enforcement authorities gather and share cross border consumer complaints that can be used to investigate and take action against international scams. Econsumer.gov originally was launched in 2001. This new version includes an updated logo and design, and is optimized for mobile devices.

ICPEN members announced the updated econsumer.gov website today during ICPEN’s semi-annual, network-wide meeting held from October 13-16 in Manchester, United Kingdom. Hosted by the UK Competition and Markets Authority (CMA), the semi-annual meeting brought together investigators and attorneys from agencies around the world for enforcement training.

Consumer complaints filed through econsumer.gov are entered into Consumer Sentinel, a complaint database maintained by the FTC, and are made available to enforcers and regulators in countries with participating agencies. Those agencies may use the complaints to investigate cross-border issues, uncover new scams, pursue regulatory or enforcement actions, and spot consumer trends.

According to the website, 23,608 complaints were collected during 2014. The most frequent complaint category listed (22% of complaints) is “Other,” followed by 18% – “Merchandise or service never received,” and 13% – “Failure to honor refund policy.” Debt collection issues were not specifically referenced in the chart, which includes the top 10 categories. The following images show all complaint categories as they appear to consumers, and then the specific page related to “debt.” 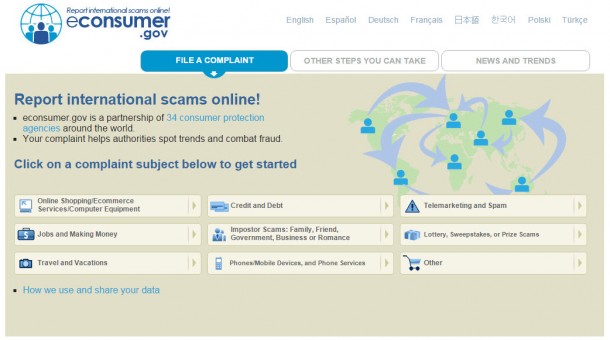