Yesterday the Consumer Financial Protection Bureau (CFPB) released its second Monthly Complaint Report. Each month includes a product and a geographic spotlight. This month’s focus is on credit reporting and Los Angeles, respectively.

In July 2015 the CFPB received 26,700 complaints. This table shows the breakdown by product, and also the % change for each compared with the same period in 2014. Consumer loans and credit reporting experienced significant increases; debt collection and bank account/services had minor decreases.

Within credit reporting, the overwhelming majority (77%) complaint was incorrect information on the credit report. This correlates to the most common type (37%) of debt collection complaint, which is “continued attempts to collect debt not owed.”

The list of the most complained-about companies remains exactly the same as it was last month, with the list topped by credit reporting companies and large banks. 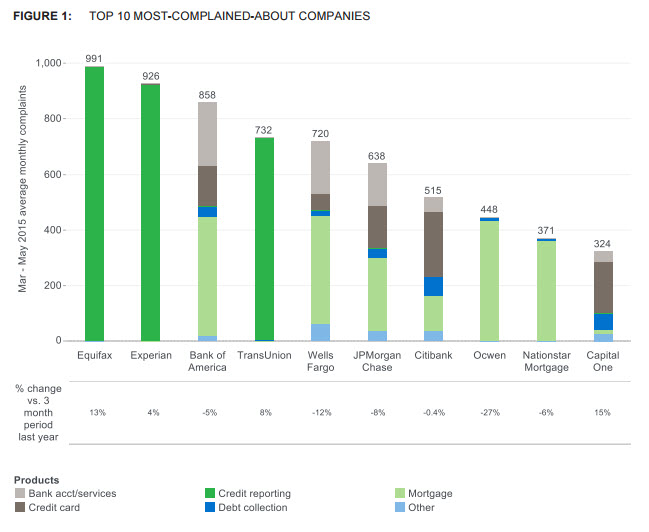 Last month’s spotlight was on debt collection; this month’s is credit reporting. What’s interesting is the significant difference in these two markets from a supervisory/enforcement standpoint.

As shown in this table of the most-complained-about companies for credit reporting, there are basically only three firms. It’s hardly worth even mentioning the others, but they scrape up a list of seven. Together, the top three firms represent 39% of all credit reporting complaints. 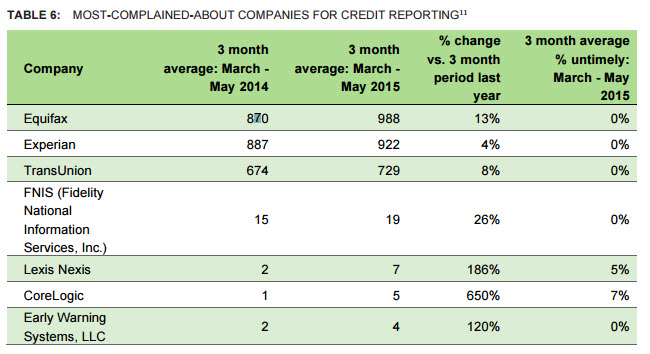 As we reported last month, the CFPB’s list of most-complained-about companies for debt collection has twenty firms. Combined, those twenty only represent 16% of all debt collection complaints. In most cases, you’ve got an average of about 30 complaints per month against companies that have millions of consumer contacts.

From a supervisory/enforcement standpoint, there is an enormous difference between these two markets. One is extraordinarily concentrated; one is extraordinarily fragmented. Also, it’s pretty difficult – and not so obviously profitable – for a scammer to pose as a credit reporting agency. It’s quite easy for a crook to pose as a debt collector, make a quick buck, and disappear.