Revenue, Earnings Down for Most Collection Agencies in 2012

Debt collection agencies saw earnings decline in 2012 compared to the previous two years, according to a financial benchmark report from insideARM.com.

Earnings before interest, taxes, depreciation, and amortization (EBITDA) as a percentage of revenues was lower for each of the eight company size categories in the report except the very smallest, agencies with under $500,000 in annual revenue.

Not only was EBITDA down from 2011 to 2012, but the metric also fell well below EBITDA percentages for 2010. EBITDA is widely used as a measure of operational profitability for a company.

The Collection Agency Financial Benchmark Report 2013 draws information from a variety of public and private-sector sources, and aggregates data from 2,370 collection agencies. Results are reported among eight company-size categories, from agencies with less than $500,000 in revenues to those with revenue up to $100 million annually. The data in the report is from the full year 2012. 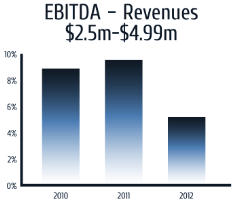 The graph at right shows the typical breakdown of EBITDA as a percentage of revenue over the past three years. This graph, which is included in the report, shows results for agencies with between $2.5 million and $5 million in annual revenue. EBITDA increased slightly from 2010 to 2011 and then sharply dropped off last year.

Graphs for other company sizes, also in the report, show a very similar pattern, except for agencies with less than $500,000 in revenue: they showed a very slight uptick in EBITDA in 2012.

The most likely culprit was increased expenses. As shown in other data in the report, operating expenses as a percentage of revenue soared in 2012 across most company sizes.

When the data is presented in real dollars, however, operating expenses were relatively flat. The real problem was a decline in revenue in 2012. Real revenue across most business sizes in 2012 was below the five-year average (2008-2012).

Blame the decline in revenue on persistently high unemployment, a nightmarish regulatory environment for both creditors and collectors, or on any other factor; it still appears that most ARM companies had less coming in last year.

Next Article: 7 Tasks Your Revenue Cycle Could Be ...

Director of Budget and Finance