For the second straight quarter, the percentage of Americans with at least one account in the third party debt collection system hit an all-time high in the first three months of 2013. Close to 15 percent of consumers have an account being worked by debt collectors.

The Federal Reserve Bank of New York (FRBNY) Tuesday published its Quarterly Report on Household Debt and Credit for the First Quarter of 2013. The FRBNY noted that 14.64 percent of Americans had at least one account on their credit reports furnished by third party debt collection agencies, and all-time high. The figure was up slightly from the fourth quarter of 2012, which set a then-record 14.63 percent. 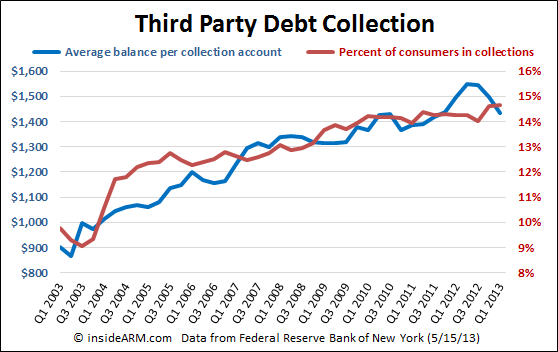 The Quarterly Report on Household Debt and Credit is based on data from the New York Fed’s Consumer Credit Panel, a nationally representative random sample drawn from Equifax credit report data. In the notes for the report, the FRBNY says that “only a small proportion of collections are related to credit accounts with the majority of collection actions being associated with medical bills and utility bills.”

In Q1 2013 total household indebtedness fell to $11.23 trillion, one percent lower than the previous quarter and considerably below the peak of $12.68 trillion in Q3 2008.

“After a temporary deceleration in the previous quarter, the data suggest that household deleveraging has resumed its previous trajectory,” said Wilbert van der Klaauw, senior vice president and economist at the New York Fed. “We’ll look to see if this pace of debt reduction and delinquency improvements will persist in upcoming quarters.”

Next Article: Maintaining Your Integrity through Healthcare Data Integrity