CFPB Releases Debt Collection Complaints Data, and Here It Is

The Consumer Financial Protection Bureau (CFPB) today published debt collection complaints it has been collecting since July 10. The data was made publicly available in the Bureau’s Consumer Complaint Database.

The regulator said that the complaints represent only those that had responses from the companies named in the complaint. The initial number is far below the debt collection complaint totals from the FTC, which averaged around 15,000 per month.

Response disposition was roughly in-line with other industries in CFPB’s database. Of the 5,329 debt collection complaints submitted, 5071 consumers reported a timely response from the company. Furthermore, only 843 consumers (15.8 percent) disputed their resolution. And in 66.5 percent of cases, companies closed the consumer complaint with just an explanation.

What Did Consumers Complain About? 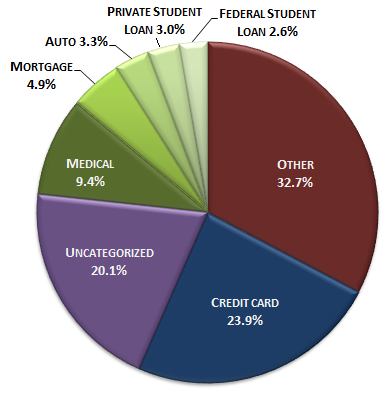 When consumers visit the CFPB’s complaint submission tool, they are asked to identify from a preset list what type of debt led to the complaint. The most common debt type cited was “Other” (with telecom debt, health club, etc. given as examples). Credit card debt accounted for nearly 24 percent of complaints while another 20 percent were “Uncategorized” (“I Don’t Know” is an option in the complaints tool). Other specifically named debt types were student loans – both federal and private, medical debt, auto loans, and mortgages.

The “Other” and “Uncategorized” debt types will likely decrease very soon. The CFPB Wednesday also opened up their complaints tool for payday loans. In our analysis of the company types (explained in more detail below), there were at least a couple hundred debt collection complaints against known payday lenders. Many of the “Other” complaints will probably show up as Payday Loans in the near future.

Consumers are then given six broad debt collection issues used to classify the nature of their complaint. The most common issue, accounting for 40 percent of all complaints, was “Continued attempts to collect debt not owed.” Communication tactics accounted for another 20 percent of complaints:

After one is selected, another set of sub-issues specific to each main issue is revealed. This list is much longer and more varied. But nearly 25 percent of consumers that complained claimed that the debt in question was not theirs: 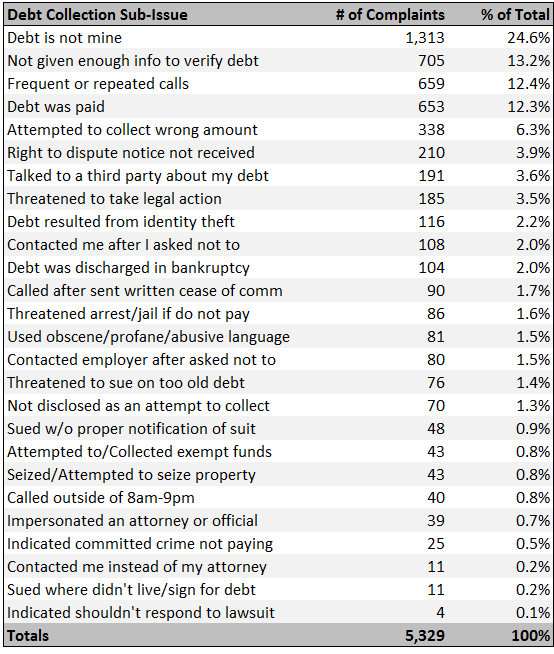 Who Did Consumers Complain About?

Well, debt collectors. And major banks. And debt buyers and loan servicers and collection attorneys and payday lenders and utilities. Pretty much every kind of financial institution. 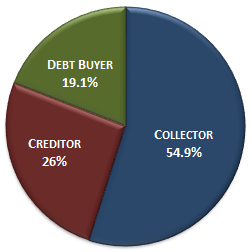 Since there were so many companies, insideARM.com analyzed the top 150 companies and assigned one of three broad (very broad, in fact) company types to each: collector, creditor, or debt buyer. The 150 companies were the ones that had the most complaints, and when aggregated, they accounted for 77.5 percent of all complaints.

It should be noted that the overall percentage of collector complaints will probably grow slightly, mainly at the expense of creditors. The very largest banks had many complaints logged against them, and were counted among the 150. But many companies with only one or two complaints are small debt collection agencies. So the overall “collector” share is likely a little higher.

This is just a surface analysis of this complaint data. insideARM.com will be looking at the numbers in many different ways in coming days. Stay tuned!

Stephanie Eidelman and Stephanie Levy contributed to this report.