While 7.5 percent of complaints may seem small, it helps to clarify exactly what types of credit products and companies are most often raising the ire of consumers.

In fact, 54 percent of named companies had either one or two complaints.

insideARM.com analyzed the top 200 companies and assigned business types for each. The complaints made against these companies accounted for 79 percent of all complaints filed in Q1 2014. 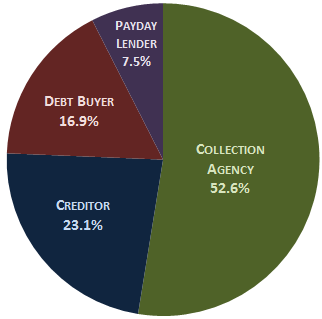 All categories that we analyzed in November of last year declined. How is that possible? A new category was added: payday loans. Payday lenders and their collection units accounted for 7.5 percent of complaints made against the top 200 companies.

It should come as no surprise to the ARM industry that payday loans are becoming more prominent in collection complaints. State attorneys general have been focusing on payday loan collection enforcement for a while. But the CFPB is also getting involved in the market, filing an action late last year against a short-term lender and its collection unit. And the Bureau recently issued a report on payday lending and noted it is very close to issuing new rules for the market.

Next Article: Debt Buyers: The Search to Meet New ...