The percentage of Americans with at least one account in the third party debt collection system jumped to 14.3 percent in the first quarter of 2014, according to a report released Tuesday by the Federal Reserve Bank of New York.

The report also measures the dollar amount per collection account. That figure fell slightly in the first quarter of 2014 to $1,518 from $1,520 in the previous quarter. 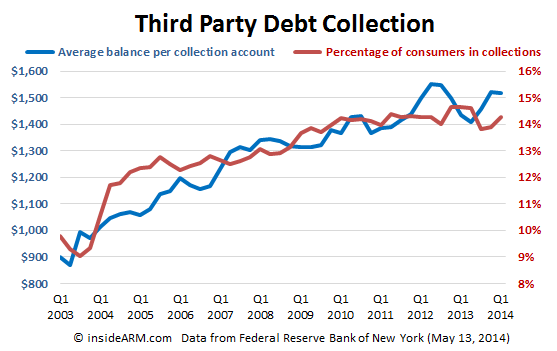 Aggregate consumer debt increased in the first quarter by $129 billion, marking the first time aggregate debt has grown for three consecutive quarters since Q3 2008. As of March 31, 2014, total consumer indebtedness was $11.65 trillion, up by 1.1 percent from its level in the fourth quarter of 2013. The four quarters ending on March 31, 2014 registered the largest increase ($419 billion or 3.7 percent) in total debt outstanding since late 2008. Nonetheless, overall consumer debt still remains 8.1 percent below its Q3 2008 peak of $12.68 trillion.

Mortgages, the largest component of household debt, increased 1.4 percent during the first quarter. Mortgage balances shown on consumer credit reports stand at $8.17 trillion, up by $116 billion from their level in the fourth quarter.

Delinquency rates improved for most loan types in the first three months of 2014. As of March 31, 6.6 percent of outstanding debt was in some stage of delinquency, compared with 7.1 percent in 2013Q4. About $770 billion of debt is delinquent, with $560 billion seriously delinquent (at least 90 days late or “severely derogatory”).

Next Article: CRS - Traditions are Maintained During a ...