As the ARM industry prepares for 2014, it might help in strategic planning to know which types of debt are attracting the most consumer complaints about debt collection.

The Consumer Financial Protection Bureau’s (CFPB) consumer complaints database is now up to some 7,600 debt collection complaints, up from 5,300 in early November. These represent complaints for which a company was identified and responded through the CFPB’s Consumer Response channels.

When consumers visit the CFPB’s complaint submission tool for debt collection, they are asked to identify from a preset list what type of debt led to the complaint. The current choices are Credit Card, Mortgage, Medical, Payday Loan, Auto, Federal Student Loan, Non-Federal Student Loan, I Do Not Know, and Other (i.e. phone, health club, etc.).

Those options are likely to change in coming months as the CFPB identifies more definable asset classes. In fact, the options have already changed in the month since the CFPB began publishing debt collection complaints. The CFPB recently opened up their complaints tool for payday loans, and that debt type – not captured in the initial release – is now showing up. 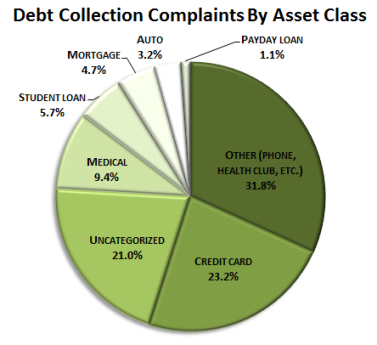 Still, the most common debt type cited was “Other,” at 31.8 percent. Credit card debt accounted for more than 23 percent of complaints while another 21 percent were uncategorized (most likely due to consumers selecting the “I Don’t Know” option). Complaints about debt collection practices on medical accounts are approaching 10 percent.

Although still a very small percentage, 1.1 percent, Payday Loan is the fastest-growing complaints category, given that it is just weeks old.

Going forward, the CFPB will hopefully further break down debt types to include at least utility and/or telecommuncations (phones, cable, internet) options. Those are popular debt types in the ARM industry and it would be helpful to know how many complaints they are generating.

Need help responding to debt collection complaints? insideARM.com now offers resources for just that. Our downloadable report, To the Point: Complaints and Dispute Resolution, tackles a lot of issues ARM companies are having right now with complaints. And in early January, complaints will be the feature of an insideCompliance webinar: Collection Complaints – Harnessing and Responding to CFPB Scrutiny.