The number of debt collection complaints in the CFPB’s consumer complaints database claiming that debt collectors are chasing incorrect debt increased in July compared to the previous month and quarter. Interestingly, there has been a sharp rise in consumers claiming that the debt in question has already been paid.

In July 2014, the CFPB published 3,431 debt collection complaints, essentially unchanged from the 3,391 published in June. And for the most part, the complaint numbers were very similar.

The percentage of complaints dealing with credit card debt in June (20.8%) was just slightly lower than in June (21.8%). The most popular category of debt types – Other, which includes telecom debt, health club, etc. – was unchanged at 27 percent.

Likewise, the outcome of complaints once forwarded to ARM companies was similar. In July, nearly 72 percent of complaints were reported as “Closed with explanation,” down slightly from 73 percent in June. Firms are still hesitant to close complaints with any kind of relief, with less than 20 percent offering monetary or non-monetary relief in both months.

But the number of consumers claiming that the debt in question was paid jumped to 12.2 percent in June from 11 percent in July, an increase of more than 10 percent.

When consumers log a complaint, they are asked what issue lead to the complaint. There, they are given a choice of six pre-set issues. Once that selection is made, a menu of sub-issues appears based on the primary issue selected.

The most common sub-issue in July, as with every month, was “Debt is not mine,” accounting for 25.4 percent of all debt collection complaints. In June, that figure was 25.2 percent. 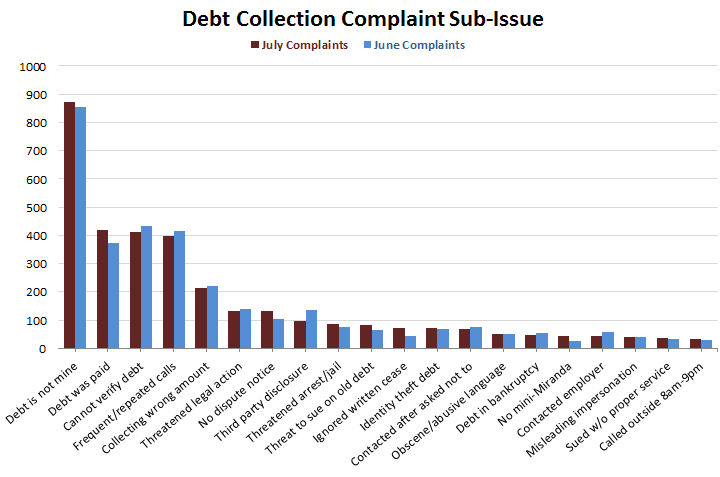 “Debt was paid” was the second most-common issue in July for the first time. In June, it was the fourth-most common sub-issue, behind “Not given enough info to verify debt” and “Frequent or repeated calls.”

And claiming that the debt has been paid is officially trending in the CFPB complaints database.

In the first quarter of 2014, 10.1 percent of complaints claimed that the debt was paid. In Q2, the number rose to 10.7 percent. June, the final month of the second quarter, saw 11 percent claim the debt was paid. And now we land at July, with 12.2 percent.

It remains to be seen whether the trend persists for the remainder of the year. If it does, it could be a sign that debt collection agencies and debt buyers are not effectively communicating with their creditor clients or updating their systems to accurately reflect payment.