Consumers Claiming Debt Isn't Theirs On the Rise

In the first quarter of 2014, the percentage of consumers that filed complaints against debt collectors claiming that the debt in question was not theirs increased to more than 40 percent of all complaints.

Overall, the number of debt collection complaints in the first quarter of 2014 were flat compared to Q4 2013, with 6,647 logged this year, and 6,661 reported in the final three months of last year. 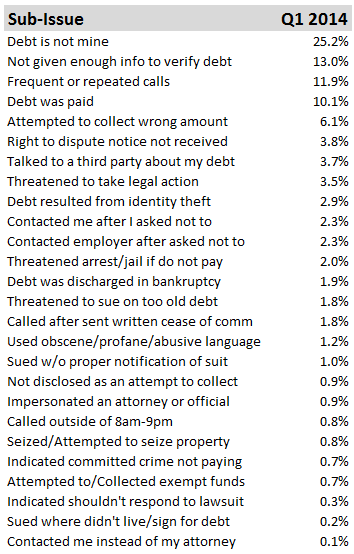 Depending on which of the six pre-set categories consumers choose for their primary issue, a secondary menu of options appears, which the CFPB calls “Sub-Issue.” Taking all of the possible sub-issues into account across all six issues, more than 25 percent of ALL consumers logging complaints insist simply that the “debt is not mine,” with another 10 percent claiming that the debt had already been paid.

We can’t say whether consumers are deliberately using the “Debt is not mine” excuse or if collection agencies really are going after the wrong consumers for their debts. But a full 35.3 percent of all complaints in the first quarter insist that the collectors are wrong. And the number could be higher if the 13 percent claiming improper verification are included.

What is clear is that collection operations need to address the issue by making sure skip tracing processes are up to date and having procedures in place to deal with consumers that object on collection calls.

This article originally appeared in the latest issue of Know Your Debtor, a free quarterly newsletter focused on the U.S. consumer environment. Make sure you’re registered to receive insideARM’s newsletters on your User Profile page.