Despite a drop-off in severely delinquent credit, the percentage of Americans with at least one credit report trade line from third party debt collection agencies stayed near an all-time high in the second quarter of 2013, according to the Quarterly Report on Household Debt and Credit from the Federal Reserve Bank of New York.

The New York Fed (FRBNY) reported that 14.60 percent of Americans had a third party collection action on their credit reports in Q2 2013, down very slightly from 14.64 percent in the first quarter, the highest rate on record.

The average balance on third party debt collection accounts continued to fall in the quarter. In Q2 2013, the average was $1,409 per account, down from $1,433 in the first quarter and well below the all-time high of $1,550 set in the second quarter of 2012. 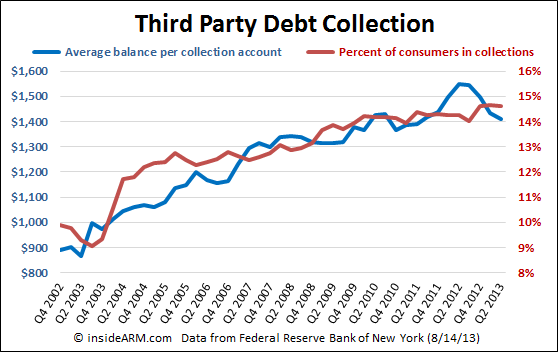 The FRBNY report noted that accounts reported by third party debt collectors often have little bearing on overall consumer credit trends. The report says, “only a small proportion of collections are related to credit accounts with the majority of collection actions being associated with medical bills and utility bills.”

Consumers have been falling behind on credit accounts at a far slower pace over the past year.

In Q2 2013 total household indebtedness fell to $11.15 trillion; 0.7 percent lower than the previous quarter and 12 percent below the peak of $12.68 trillion in Q3 2008.  Mortgages, the largest component of household debt, fell $91 billion from the first quarter.

How to Optimize Your Dialing Operations While Combating Call Blocking

The CFPB's New Rules for Debt Collection: An Introductory Webinar on What Changed, What Stayed the Same, and What to Do About It

Future Proof Your Collections Center in this Pandemic Era

On Demand: The Role Crisis Can Play in Accelerating Innovation and Adoption

On Demand: Delivering Timely Customer Support in the Face of Rising Demand and Capacity Constraints

On Demand: The Impact of COVID-19 on Offers, Segmentation and Contact Strategies

On Demand: Leading Strategically Through the Recovery: The Industry Outlook

Ask Amy: Leading with Authenticity During a Crisis