Although the debt collection complaints data from the Consumer Financial Protection Bureau (CFPB) has been public for only a few weeks, ARM firms and creditors have been responding to the incoming complaints since July. An analysis of the responses show varied strategies in the companies’ interactions with consumers and the CFPB.

insideARM looked at the top 10 companies with the most debt collection complaints in data released by the CFPB. The agency notes that the data it has published contains only complaints for which the company has completed a response.

The top 10 companies account for about 30 percent of the total of debt collection complaints. Each company has at least 100 complaints. The top 10 list also provides an interesting cross-section of company types; five are ARM companies (debt buyers and collection agencies) and five are creditors.

The companies’ strategies for responses vary fairly widely. “Closed with explanation” and “Closed with non-monetary relief” are the two most common dispositions, but companies appear to choose one to favor over the other.

In the chart below, we show the percentage of each disposition by company for all complaints that have been resolved. Under the company name is the total number of debt collection complaints filed against a company from July 2013 to November 20, 2013. 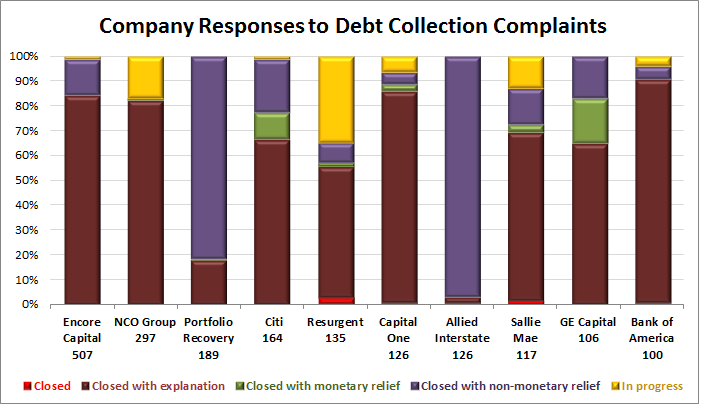 It should be apparent that “Closed with Explanation” is the most common response for most companies. But two ARM companies, Portfolio Recovery Associates and Allied Interstate, lean more heavily on “Closed with non-monetary relief.”

Closing complaints with monetary relief is very uncommon, especially among ARM firms. Creditors are the only companies with significant percentages of complaints that required some sort of monetary exchange, with GE Capital Retail and Citi (two of the largest financial institutions in the world) leading the way.

After a company has responded to a consumer through the CFPB, the consumer has the opportunity to dispute or accept the response. Most often, according the CFPB’s data, the consumer does nothing which requires no further action from the company. But in about 20 percent of cases, when the consumer is asked by the CFPB “Do you dispute the company’s response,” they will answer Yes or No. 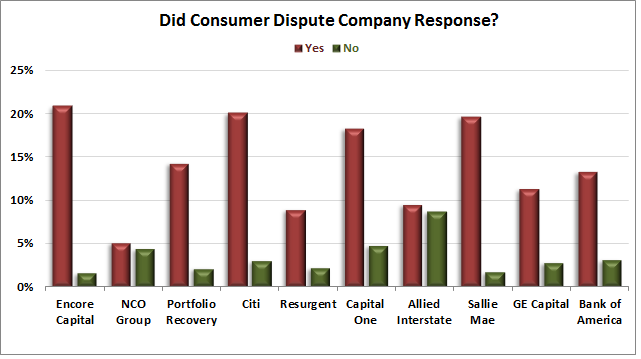 Encore and NCO had nearly identical response strategies, but NCO had the lowest dispute rate of any company in the top 10 and Encore had the highest. Likewise, Portfolio Recovery and Allied Interstate were the only two companies to use “Closed with non-monetary relief” as the most common response, but their dispute rates were quite different. Student loan provider Sallie Mae had the worst ratio of disputes to acceptance among creditors.

As the task of complaint response matures in the ARM industry, we are sure to see more standardized data. But it is interesting that companies are approaching the task differently in the early going.

Next Article: Guilty Plea for Bank Official on Receiving ...

ARM is different: 6 Ways ARM Payment Processing is Distinct From All Other Industries