A Closer Look: Reviewing the Top 5 FDCPA Complaints in 2009 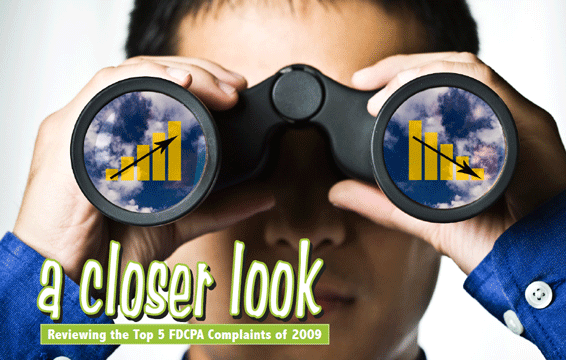 A Closer Look: Reviewing the Top 5 FDCPA Complaints in 2009

[Originally published in the May/June 2010 issue of collector mentor]

Each year the Federal Trade Commission (FTC) provides Congress with a report on the Fair Debt Collection Practices Act (FDCPA). While the report focuses heavily on the number of complaints received from consumers, it also summarizes actions that the FTC has taken to “curtail deceptive, unfair, and abusive debt collection practices.”

We encourage you to download and review the 2010 FDCPA report in its entirety to become familiar with its contents, and if you haven’t reviewed the FDCPA lately, you might considering doing so while this article has your attention.

We review the top five FDCPA complaints received by the FTC in 2009 and point you to the corresponding section of the FDCPA.

#4 Threating Action Which Cannot or Is Not Intended to Be Taken.

“In 2009, 20.9% of FDCPA complaints, or 18,438 complaints, reported that thirdparty collectors falsely threatened a lawsuit or some other action that they could not or did not intend to take … .” The FDCPA §807(5) says: A debt collector shall not threaten to take any action that cannot legally be taken or that is not intended to be taken.

“Last year, 25.7% of the FDCPA complaints, or 22,708 complaints, reported that collectors did not provide the required notice….”

The FDCPA §809(a) says: Within five days after the initial communication with a consumer in connection with the collection of any debt, a debt collector shall, unless the following information is contained in the initial communication or the consumer has paid the debt, send the consumer a written notice … .” (The notice is referred to as the Validation Notice and includes the amount of the debt, name of the creditor, and important information regarding disputes and verification.

#2 Demanding a Larger Payment Than is Permitted by Law.

“This category includes two different FDCPA law violation codes. First, the FDCPA prohibits debt collectors from misrepresenting the character, amount, or legal status of the debt. Other complaints in this category state that collectors have sought to collect on debts that have been discharged in bankruptcy. In 2009, 31.1%, or 27,420 FDCPA complaints, described this conduct.”

“In 2009, 46.5% of FDCPA complaints the FTC received, or 41,028 complaints, claimed that collectors harassed the complainants by calling repeatedly or continuously.”

The FDCPA §806(5) says: A debt collector may not cause a telephone to ring or engage any person in telephone conversation repeatedly or continuously with intent to annoy, abuse, or harass any person at the called number.”