From Zero to Texas in Just One Day: Evolution of Dialing Technology

Jeryl Smith, IAT’s Director of Operations and Product Manager, contributed to this article.

Answer: The estimated number of days it would take to call every single person (not phone numbers or households, individuals) with a small predictive dialing system.

We have not always been able to dial every single person living within the State of Rhode Island in a single day using just 8 dialing ports. Let’s jump back 25 years and look at the technology’s beginnings.

The beginning of dialer time 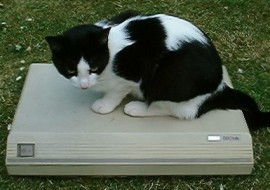 DECtalk DTC01, with a cat for scale (Source: Wikipedia)

In the 1980s, dialing technology was unbelievably productive, but extremely archaic. The first dialing technology we remember was the DECtalk single-line system. This box deployed text-to-speech technology developed by Digital Equipment Corporation. The device’s male voice was named “Perfect Paul” and is the voice unit Stephen Hawkins and some emergency broadcast systems use today. 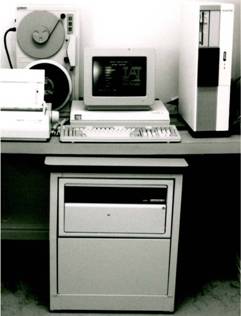 This DECtalk unit had no “answer detection.” The system would simply dial, wait 10-15 seconds and then start delivering the message. A mind-boggling advancement came when a separate device named a SmartBox was engineered for detecting a ringing phone.

Later advances allowed expansion to a “multi-line” DECtalk cabinet accommodating up to 8 cards for 8 phone lines. This was the start of IAT’s SmartDial product for connecting agents to debtors (predictive dialing).

Early dialing technology was extremely expensive, but also extremely productive. Many agencies could only afford to install 2 or 4 dialing lines even if they employed 20+ full-time collectors. Four dialing lines might be able to keep 2 collectors “busy” for a day. It was common for an agency to rotate collectors on and off the dialer, so they could have equal dialer time.

Some early dialers lacked a method of automatically importing account information. Agencies would employ data entry clerks to manually enter this data. As technology improved, data could be imported to the dialer via a serial connection, cassette or reel-to-reel tape.

Early dialers also didn’t have a method to automatically update call results, and was manually updated by the collector or the data entry person. It was a “happy day” when tapes were able to collect and distribute this data.

In those early years, you often needed to place two terminals on the dialer agent’s desk—one for the “host” system and one for the “dialer.” When a dialer call was transferred to an agent, the agent had to manually key the account numbers into the “host” terminal and answer a separate phone dedicated to dialer calls.

It was a major advancement when dialer companies provided “dual port” terminals that could be “toggled” back and forth from the “host” software to the “dialer” within one terminal. These dual port terminals were custom-made for dialer vendors.

We’ve come a long way from the mid-1980s when a single-line DECtalk box might have placed 200 calls in one day. Now a single dialing board could realistically handle over 160,000 calls in the same time period. You can also connect multiple dialing cards in a single system, dramatically increasing the number of possible daily dialing attempts. Plus, many dialers are configured as multiple dialing “nodes” connected to a single dialing data service. Site premised and hosted dialing services (or cloud dialing) can virtually offer unlimited dialing capabilities.

Now, if you wanted to, you could call every person in Texas in just one day.

It has been fun actively participating in the evolution of dialing technology. We wonder where this technology will take us in 5, 10 or 20 years!

Jeryl Smith, IAT’s Director of Operations and Product Manager, is aware of client and industry needs and strives to make products easier to use and more functional for everyone. He has been involved in client support and product development since the mid 1970s and knows the importance of excellent client support services. Jeryl has 35 years in the client support and software development field—24 of those at IAT.

Dave Rudd is DialerFan, a champion of the collection industry, focused on improving collection capabilities through technology and political action. He energetically participates in lobbying efforts for the industry through donations, writing letters, making phone calls, participating in seminars and attending events in Washington D.C., including the most recent ACA International Fly-In. Well acquainted with debt collection, Dave spent two years debt collecting before joining IAT in 1990. He has held a variety of positions at IAT — a provider of collection-specific dialing technology — including President/CEO and most recently Senior VP of Finance & Administration.

Next Article: Do You Collect Student Loans?