The U.S. Labor Department said Friday that employers added 162,000 jobs in July and that the official unemployment rate dropped to 7.4 percent, the lowest in close to five years.

The report was a little surprising to economists, in a negative way. Earlier in the week, the Labor Department reported that weekly jobless claims had dropped to a five-year low. Most economists predicted at least 180,000 jobs added in July.

Amplifying the tepid report was the revision of job gains from previous months; hiring totals were revised downward by a total of 26,000 across May and June. 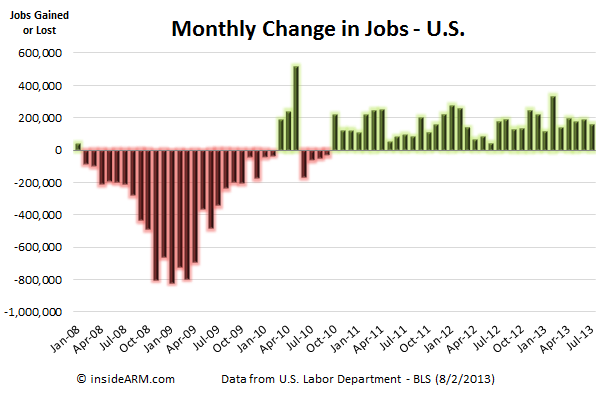 Retail trade added 47,000 jobs in July and has added 352,000 over the past 12 months. Financial activities employment increased by 15,000 in July, with a gain of 6,000 in securities, commodity contracts, and investments. Over the year, financial activities has added 120,000 jobs.

Employment also increased in wholesale trade (+14,000) in July. Over the past 12 months, this industry has added 83,000 jobs. Employment in professional and business services continued to trend up in July (+36,000).

The alternative U-6 measure — which counts total unemployed, plus all persons marginally attached to the labor force, plus total employed part time for economic reasons — fell to 14 percent in July from 14.3 percent in June. The U-6 measure is often called the “real” unemployment rate by economists.

Next Article: Improve Patient Collections with a 'Credit Card ...