Credit Card Debt in May Grows at Fastest Pace Since Recession

U.S. consumers in May added $8 billion to their outstanding credit card bills, the largest increase since before the beginning of “The Great Recession.”

The Federal Reserve said in its monthly consumer credit data release (also known as G.19) that total consumer credit card debt outstanding at the end of May was $870.2 billion. The revolving debt numbers come straight from Fed member financial institutions.

Total revolving debt outstanding in May increased a seasonally adjusted 0.93 percent from April, marking the highest monthly increase since November 2007, a month before the recession officially began and nearly a year before the financial crisis of fall 2008. 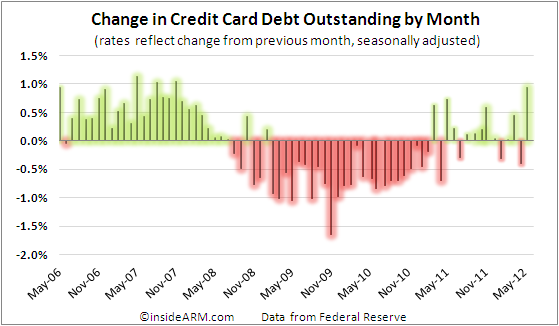 May’s numbers continue a trend of positive growth for credit card debt that has been evident for more than a year. 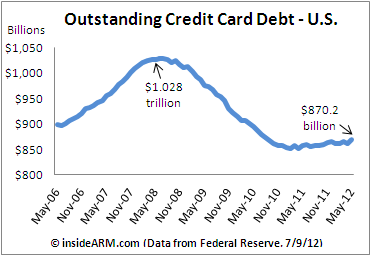 But in March 2011, card debt started to grow again. In the 14 months since then, consumers have added nearly $15 billion in debt to their credit card accounts.

The Fed said that other consumer lending also increased in May. Non-revolving debt – mostly comprised of auto and student loans – grew by $9.1 billion in the month. The Fed’s G.19 report does not include debt backed by real estate.