Simon’s Agency, Inc. is proud to announce that it broke ground on its brand new building on August 27th. The 5,000 Sq. Ft. facility will be located across the street from Wegmans in a brand new commercial development at 4938 West Taft Road, Liverpool, N.Y.

Local construction firm, Rich & Gardner, has been contracted to complete the work with a targeted move-in date of December 15th. Local companies will also be used to provide additional services such as office layout, furnishing & décor, as well as technology and security services.

Once Simon’s has moved into the new facility it will allow the company to start hiring additional employees almost
immediately. Simon’s has doubled in size in consecutive 4 year periods and is poised to do so once again in 2016 with this latest move to a larger facility. The new facility will allow for a mixture of at least 50 full and part time employees to work for Simon’s Agency in Central New York. These employees will be phased in over a 30-36 month period.

For owner, Phillip M. Bova, the future couldn’t be brighter, “The last decade has represented the largest growth we have sustained over the years, but it pales in comparison to where we are heading over the next ten years. A changing landscape with regard to technology, in particular the internet, has allowed Simon’s to grow beyond the scope I had imagined possible and now it’s time to reinforce this technological advancement with a new facility that can house the employees we will need to sustain this growth into the future. As a business owner, it’s imperative to reinvest in your own success and that’s exactly what we aim to do with this project.” 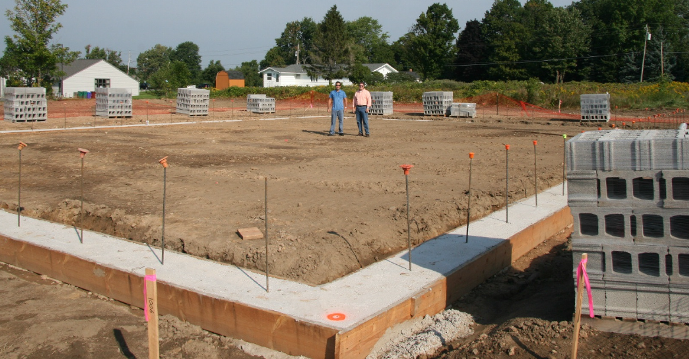 President/Owner, Phil Bova and VP of Operations, Tim Buckles stand in the construction area of the future facility on September 5, 2014.

To better reflect its position as a regional collection agency throughout the Northeast USA, Simon’s Agency has completed a rebranding effort by officially launching a new logo and web site. Using a similar color palette it was able to transform its existing logo which depicted its slogan as a roadway “turning red to black” into what it feels is a tighter and stronger representation of its brand.

Additionally with the help of local web design firm, ACS, Inc., Simon’s was able to launch a far more detailed and responsive web site (www.simonsagency.com) which outlines its services more effectively and gives its clients
direct access to its Client Reporting System and integrated file placement system, which it began rolling out this summer.

To complement this internet presence they have also launched three blogs (www.turningredtoblack.com,
www.simonscares.com, & www.appliedrecoveryscience.com) which aim to educate its clientele on various subjects related to billing and collections and updated their social media presence across Facebook, Twitter, LinkedIn, Google+ and YouTube.

Simon’s Agency, Inc. is a Central New York collection agency that leverages state-of-the-art technology, one-on-one client relations and the vast experience of its management team and multi-lingual collection staff to recover its clients’ outstanding receivables. Born from a handful of medical clients in 1965, the agency today serves over 400 healthcare industry professionals and groups as well as hundreds more clients in other professional industries.

Next Article: Debt Collector's Testimony May Be Critical in ...