Real gross domestic product (GDP) in the United States grew at a 2.2 percent annualized rate in the first quarter of 2012, below the 2.7 percent grow rate expected by many economists.

The Commerce Department’s Bureau of Economic Analysis (BEA) said early Friday that the deceleration in real GDP growth in the first quarter primarily reflected a slowdown in private inventory investment and a downturn in nonresidential fixed investment.

Motor vehicle output, real personal consumption, and residential fixed investment increased, and contributed to the 2.2 percent GDP growth. Consumer spending increased 2.9 percent in the first quarter, above economists’ estimates and significantly higher than the 2.2 percent increase in the fourth quarter of 2011.

U.S. GDP grew at a 3 percent annual rate in the fourth quarter. 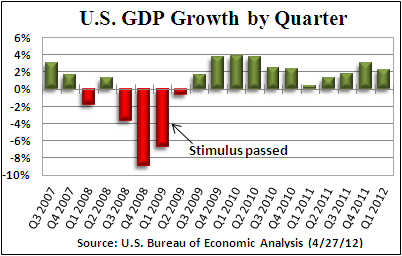 Although the report did not meet expectations, the modest first quarter economic growth rate kept pace with growth trends that started in early 2011. It still marked the second-fastest growth rate since late 2010, when the effects of the $787 billion stimulus package passed in the early days of the Obama administration began to wear off.

Next Article: Scam Collection Agency Still on Hook for ...