Collection Complaints Fall in August, But More Claim Debt is Not Theirs

The total number of debt collection complaints published by the CFPB in August fell by more than eight percent compared to July. But the percentage of complaints specifically claiming that the “debt is not mine” jumped from the previous two months. Complaints about medical debt also increased in the month.

In August, the CFPB published 3,169 consumer complaints related to debt collection. This was down from the more than 3,400 complaints published in both June and July.

The Consumer Response complaints database only lists complaints submitted to the CFPB that companies have had an opportunity to respond to, and does not include complaints referred to other regulatory agencies, complaints found to be incomplete, or complaints that are pending with the consumer or the CFPB.

The CFPB’s complaints wizard steps consumers through the submission process with standardized fields on each screen.

First, consumers must choose which type of debt led to the collection complaint. The most common debt type in August was “Other,” as it is every month. The “Other” category covers debts stemming from telecom, health club memberships, cable service and other similar accounts. 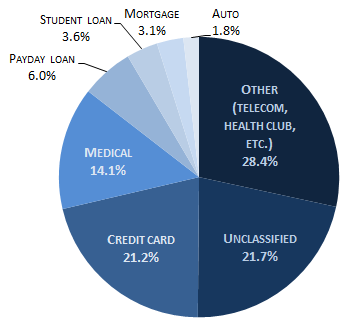 Consumers are then asked what issue led to the complaint. There, they are given a choice of six pre-set issues. Once that selection is made, a menu of sub-issues appears based on the primary issue selected.

For months, the sub-issue of “Debt is not mine” has been trending upwards. In August, it took a big leap, accounting for 28 percent of all collection complaints, compared to 25.2 percent and 25.4 percent in June and July, respectively.

Another sub-issue with an upward trend is “Right to dispute notice not given,” a letter violation that has long been a favorite among plaintiffs’ attorneys. This sub-issue accounted for 4.5 percent of complaints in August, up from 3 percent just two months prior. 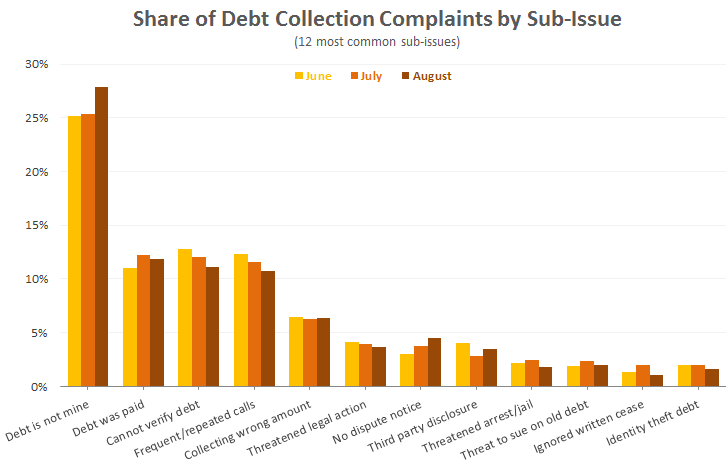 On the other side of the trend, complaints about call volume and collection agencies not giving enough information to verify the debt showed steady downward movement through the summer.